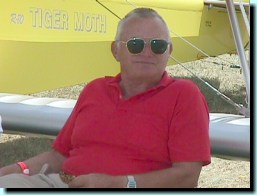 One of the exciting things about the EAAAirVenture Oshkosh is meeting some of the old timers of experimental aviation such as KenFlaglor. Flaglor, now 72, holds “court” at the communications building atWittman Regional Airport during the flying and has done so at all the EAA conventionsexcept two, the very first and the convention in Milwaukee in 1956.

Ken interview is a special one for me since I own the first aircraft Ken built, theFlaglor High Tow, known by many as the Flaglor Fleet. Ken built the High Tow out ofnecessity since he was towing gliders in the Chicago area with a Waco and wrecked it. Outof necessity, he looked for an aircraft to replace it on a very small budget and found theremains of a Fleet 16B. Knowing the Kinner originally found in the Fleet wouldn’t beenough power to haul gliders, he searched for an engine and found a Continental W-670.

The FAA told him if he built it so it didn’t look like a Fleet, he could call it anexperimental. Thus, he made it look like a Waco and flew it to Milwaukee for the EAAfly-in in 1957. Concerned that the FAA might not like the final rendition, he did notenter the High Tow in any competition to avoid attention and was surprised to find outafter he had gotten home that he had won one of the major awards at the time, “RunnerUp” for Best Construction!

Ken has since built seven more aircraft. After the High Tow, he built a Cherokee IImotor glider he powered with two go-kart engines, a Flaglor Scooter (not a Sky Scooter), aSonerai II, a GeeBee Y, an Emeraude, an UltraPup and his most recent aircraft, an R-80Tiger Moth. He had to hurry to fly off the 50 hour test period just before AirVenture.

Ken went from high school into the infantry. Upon leaving the service, he was a neontube bender for a lighting and sign company. He then was involved in developing electricalrelays and test equipment. His then started a residential window glass business andretired a few years ago. 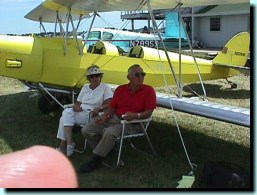 Ken’s first exposure to flying was in gliders in 1948. He soon became adesignated examiner and is proud to said “I never charged a cent.” He towed fora few years in the Waco until it was destroyed, and then three more years in the High Tow.He has been flying and building ever since.

Ken lives with his wife, Barbara, in Kansasville, Wisconsin, and took about 80 minutesto fly to Oshkosh averaging about 70 knots. They live on their own airstrip and havefrequent drop in visitors. He celebrates the 50th anniversary of receiving his pilotslicense this year and holds EAA# 3450. With that kind of experience, I asked Ken what hewould change about the AirVenture event. “Give us back our logo and conventionname!,” he responded without hesitation. “This is a convention, not afly-in.” Ken laments that the homebuilders who made up the core of the EAA have beenput in the “background” as the Association expanded to antiques and then warbirds. He understands the expansion is “where the money is,” but notes certainthings should have changed.

Ken guards all the aircraft in his area from inquiring hands and fingers and yells abicyclist prior to the convention who get their vehicles too close to the aircraft. Helongs for the days when any child less than ten years old had to be alwaysaccompanied by an adult. Ken said last year that he disciplined a child for climbing on afabric wing of a biplane and then received a tongue lashing from a parent accusing him ofpossible “psychically injuring the child for life!”

Ken likes the wide diversity of members in the EAA and enjoys talking with people fromall over the world who stop by his aircraft. Neophyte members are important as he notedthat all his construction methods were learned actually building, not a carry over fromother vocational areas. He states that it is obviously more difficult for a young memberto start building his own aircraft due to cost and regulations, noting that he once boughta PT-23 for $100. 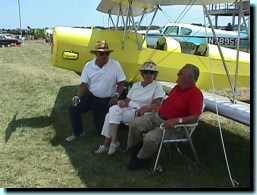 Ken also misses the old air shows which always began with Paul Poberezny in a P-63(“Paul put on a hell of a show”) and followed with the likes of Nick Rezich in aTravelAir with a 300 HP engine, Dwayne and Marion Cole with a TaylorCraft and a 450 HPStearman, Art School in a Chipmunk, and Bob Lyjak in a tapered wing Waco. He said Bobalways started with a snap on take off that “took your breath away.”

Ken has nothing but praise for Paul Poberezny, founder of the EAA. “Paul is themost honorable guy around who took care of everyone.” Flaglor notes that in the earlydays, kids would pick up trash around the convention grounds and Paul made sure they allreceived trophies at the end of the week for their efforts.

Ken is a firm believer that each and every individual can make a contribution anddifference for the Association. Too humble to acknowledge his own contributions, Ken’saccomplishments for the EAA are always touted by his many friends who drop by through theday. Ken still admits he gets excited about setting off for Oshkosh every year and neverstops smiling while he is here.