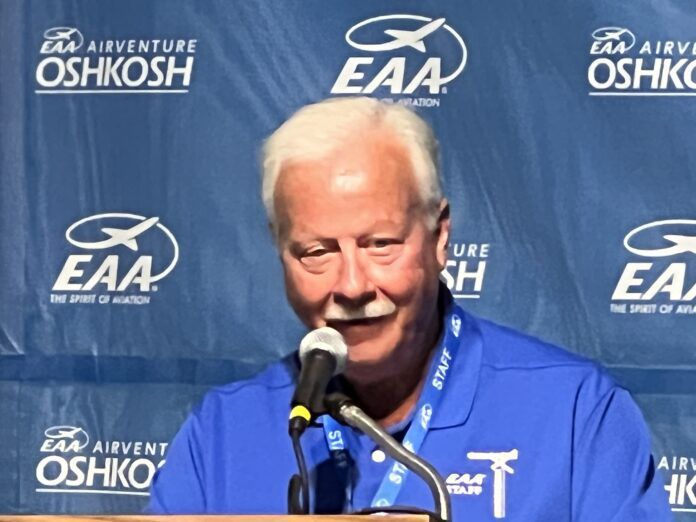 EAA Chairman and CEO Jack Pelton delivered a touching tribute to past-EAA President Tom Poberezny at his introductory press briefing earlier this week. Poberezny had passed away just hours before at 2:00 a.m. on opening day, timing that touched many who knew him and appreciated his accomplishments for personal aviation.

Getting to the business at hand, Pelton was demonstrative in his optimism for this year’s AirVenture. “We tiptoed into 2019,” he said, referring to the kaleidoscope of getting back on track in the COVID era, continuing, “This year, we’re full bore.”

Pelton noted that AirVenture 2022 featured an increase of 30 percent in forums over last year. He reminded the press that EAA had decided to allow anyone 18 years old or younger free admission—with a job skill-centric approach to establishing activities onsite, such as welding sessions and other clear avenues to careers in aviation.

As for incoming air traffic, Pelton said landings on Friday before show’s Monday launch were up 25 percent. On Sunday, the airport shut down four times from saturation, he said, due in part to the strong storms on Saturday and a foggy start that delayed pent-up arrivals.

Highlights of this year’s AirVenture include a nod to the U.S. Air Force’s 75th anniversary; the 50th anniversary of Van’s Aircraft, including the introduction of the much-anticipated RV-15 (“a tailwheel airplane with too much power and big tires,” he joked); the resumption of the “one week wonder” program—a second Sonex to be powered by a Rotax engine; and a bittersweet commemoration of Tom Poberezny and his lasting legacy with EAA and sport aviation everywhere.

Pelton continued with a summary of the new $6.2 million (self-funded, not from member dues) combination education and pilot center, for which the ribbon was cut earlier this month. He noted that the pilot center would provide scenario-based training for hombuilders, while the education center would go a long way toward stimulating the next generation of aviation professionals.

On the advocacy side, Pelton pointed to action on the 2023 FAA reauthorization legislation and how EAA was holding lawmakers’ feet to the fire on issues such as Basic Med, Sport Pilot licensing and advancing the adoption of unleaded aviation gasoline.