It’s 10 a.m. Friday, the fog is lifting, and the field has just gone VFR. Adozen pink-shirted controllers in the tower cab are choreographing a dancedesigned to make order from the weather chaos wrought by a pesky low pressuresystem hanging in lower Michigan. Welcome to the Oshkosh tower, which for oneweek of the year becomes the world’s busiest. By Friday 8 p.m. this week thetower had already seen 10,742 operations since the previous Sunday morning.”Everything depends on the weather, of course,” explained John Mullen.He’s both the Milwaukee tower manager and a regional manager for the FAA.”When the field is IFR, the best we can do is probably under 20 IFR ops anhour. We can’t do simultaneous IFR approaches.”

At the time he spoke, there were 20 or more aircraft in the area on IFR flightplans holding to get into OSH. Bad weather here and elsewhere in the U.S. mayhave been converting many flyers to drivers, or stay-at-homes, since by lastyear this time the tower had recorded 20,217 operations. Given good weather, thetower can top 6,000 operations in one day, which usually comes on the Sundaybefore the end of AirVenture. “There are FAA separation rules, and thenthere are special Oshkosh rules,” said Mullen. It’s quite a sight to standat the departure end of the active and see three planes lined on up final,virtually on top of each other – all aiming for different-colored touch-downpoints on the same runway. Monitoring the tower frequency, it often sounds likea high-speed auctioneer at work. 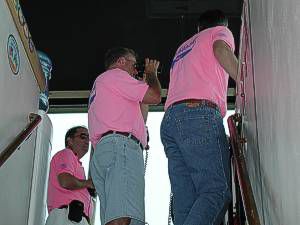 When the airport is open, at any time there are eight or more pink-shirtedcontrollers outside on the field directing traffic. Runway responsibilities areshared between the tower and the outside controllers located at two MobileOperations and Communications Workstations (MOOCOWs). The itinerant MOOCOWhandles arrival and departure separation for Runway 9/27, and Runway 18/36 ishandled by the Fly-By MOOCOW team. The tower crew is responsible for sequencingand separation of arrivals. The temporary ground station at Fisk, seven miles tothe southwest, lines up aircraft and aims them at OSH. The tower has no terminalradar, but can get a regional radar feed.

…The Pink Badge Of Courage

The FAA has staffed a tower at the EAA Oshkosh event since the 1960s.”Around November, we send out solicitations to FAA facilities around theGreat Lakes Region for volunteers to work the next year,” Mullen said.”Out of 130 responses this year, 64 controllers and 10 supervisors wereselected for the team.” It’s quite an experience and point of pride to workAirVenture, and Mullen pointed out, “Everyone knows our hot-pink shirts andhats – the controllers are the only ones on the field that get to wearthem.” A spokesman for the New Piper Company told AVweb that the pinkshirts inadvertently worn by Piper sales staff on Friday were actually”watermelon,” and will not be seen again at AirVenture since Piperchanges its shirt color every day. Fortunately, Piper personnel accidentallygesticulating to taxiing aircraft did not cause any incidents. 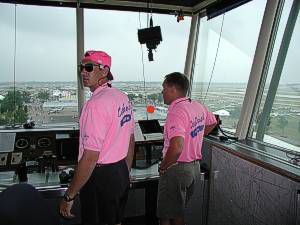 Controllers can only work Oshkosh for a total of six years, to allow others achance for this popular and challenging temporary duty assignment. Even aftertheir six years are up, AirVenture veterans still return to share thecamaraderie at the FAA’s pre-event cookout on Saturday. “Slots are filledby seniority,” Mullen said, “so even the rookies here have eight toten years experience as a Certified Professional Controller.” The tower atOshkosh is normally staffed by contract non-federal controllers, and Mullen saidthey are integrated right into the FAA team during Oshkosh without any problems.”They’re the ones that open and close the tower for us,” Mullen said,”and are part of the teams we set up.”

The controllers who come to work here take the assignment very seriously. Theyhave a study package and test to complete prior to their arrival, and actuallybecome qualified as proficient to work the OSH area just as they are qualifiedfor their home tower. “Controllers who come here end up as qualified towork their own facility, OSH, and Fond du Lac tower,” said Mullen. On theSaturday before the convention starts, there is a training and review sessionfor this season’s controllers. That’s all the on-site training they get beforetheir baptism-by-fire.

To accommodate the volume of traffic, ATC procedures at the OSH tower duringAirVenture are unlike any other facility. In addition to reduced arrival anddeparture separation standards, the operational philosophy in the tower is alsodifferent. “Normally, a controller works on his own. Here, we work infour-person teams that stay together for the entire convention week. The teamworks together on a shift and takes breaks together,” Mullen said. There isusually one “rookie” (first year here), one “limited”(second year), and at least two “veterans” with three years or moreexperience at the EAA AirVenture on each team. They work a regular week:eight-hour shifts, and two days off while on OSH duty.

A team controller working OSH must learn to trust and coordinate with his or herteammates in a new way. There are usually two spotters, with one controllerworking pilots on the tower frequency. The controller with the microphone mustaccept, and quickly relay to a pilot, the instructions the spotters are givinghim, without necessarily having a view of the “big picture” at anygiven moment. In the usual tower environment, an individual controller has theresponsibility for his position and makes the decisions. 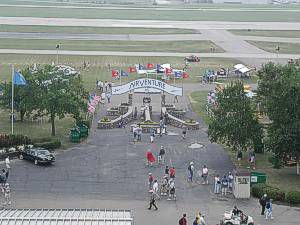 When the Mooney Caravan and its flights of 12 start showing up, or 90 Bonanzasto Oshkosh appear on the horizon, these are not surprises to the tower crew.Group fly-ins and warbird formation arrivals are all coordinated in advance formonths with the FAA. When afternoon EAA airshow time arrives, the tower and theairport are officially closed, and the control of the airshow is transferreddown to the Air Boss at “Rooftop” down on the flight line next toRunway 18/36. When the airshow is over, the tower re-opens, and when the ATIS isturned on it’s a signal that the field is open again. For an hour after theairshow, heavy demand means that only departures are allowed. There are notsupposed to be any airport operations between 8 p.m. and 6 in the morning.”It’s just too dark to safely allow anyone to taxi around with this manypeople on the field,” explained Mullen.

…What The Future Will Hold

The Wittman Regional Airport has plans to construct a new tower to be opened by2003. The present tower, built in the late ’50s, was actually moved from a siteacross the field in the mid-’60s. The new tower process is in “siteselection” right now, so the current tower will have to continue to do itsyearly stint as the world’s busiest tower for at least two more years. Onecertainty is that we will all continue to owe a debt of gratitude to thecontrollers who volunteer for service during AirVenture – we’d all be drivingif they weren’t here.