After three years of restoration by the good folks at Aviat Aircraft in Afton,Wyo., my Flaglor HighTow was ready. I sure was going to fly it back to Oshkoshto show off my new beauty! The HighTow was a Fleet 16B converted by Ken Flaglor(of Flaglor Scooter fame) to a big W-670 engine to tow gliders. A kinder andgentler 1957-era FAA said make it look like something else than a Fleet and youcan do it as an experimental, so Ken made it look like a Waco.

We took off from Driggs, Idaho – U59, just 18 miles west of Jackson Hole, thebetter airport for the area. I was accompanied by Sarah, one of my Aeromedix.comstaff, who came for the adventure, and whose job was to keep the aircraft rightside up while I messed with maps and a portable GPS. We departed about 1500local time. I’d wanted to leave earlier, but I had to work in my office Saturdaymorning and everything else seemed to be conspiring against us getting out ontime.

Since the Flaglor does not have any significant cargo space, Sarah and I eachhad one change of clothing and toiletries. The rest of our luggage was to behauled out in the Aeromedix.com trailer. We finally got everything packed,pulled the aircraft out of the hangar, swung the prop through seven fullrevolutions … at which point I noticed I had left the master switch on and nowhad a dead battery. So we incurred another delay for jump-starting.

Once I got the big round Continental started, the sputtering of a cold engine,white smoke from the exhaust, and seeing everyone at the airport looking our waymade the wait worthwhile. There really is nothing in the world quite like flyingan open cockpit biplane. 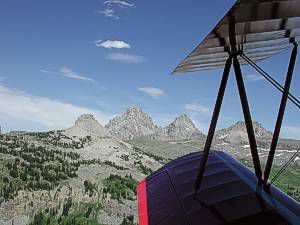 The weather was spectacular, making the takeoff from Driggs and flight over theGrand Tetons spectacular. We crossed the mountain range at about 9,500 feet justsouth of the South Teton through Death Canyon, and headed north to Dubois. Eventhough we were at 8,500 to 9,500 feet MSL during this first leg in the JacksonHole area, we were only 500 to 1,500 AGL. The air was rough and Sarah was notfeeling well, so I made our first leg short and stopped in Riverton Wyoming (RIV).Unfortunately, no one was there at the field, so we had to call out someone forgas, delaying us even more.

More embarrassing for me, I pulled out my trusty ReliefBand anti-motion-sicknessdevice for Sarah to wear during the next leg, and discovered that its batterywas dead too! Whoever used it last had left it on! All my spare batteries werein the trailer, so no ReliefBand for Sarah on this trip! Ugh!

We finally took off from Riverton and flew to Douglas, Wyo. Douglas is on theeastern border of Wyoming, and its main claim to fame is the State PoliceAcademy. Just before landing at Douglas, we passed some weird circles that youonly see from an aircraft on the river right before Douglas. If anyone knowswhat those alien landing strips really are, let me know!

As I landed in Douglas, we caught a gust of wind from the right and I dinged theleft wing tip. Now I was dead meat with the folks at Aviat, but a least I couldsay I kept the sucker from ground looping! Since I had not yet paid Aviat’sbill, I felt even worse. Of course Sarah had lots of questions! My ego wasbruised and I went over about 100 times how I could have avoided the problem,but there are lots of worse things in life.

Some nice folks helped us get into a hangar for the night, and we were given theuse of the great sort of courtesy car that you can only find at small airports- a “three on the floor” 1960s-vintage Impala. Driving that puppymade memories come back, and my anguish over the wing tip fade. Most of themotels in Douglas were full for some reason, but were able to get rooms at thelast place in town – the place that the folks at the Best Western said “wedon’t normally refer people there, but it’s the only place left in town!”It has been a long time since I spent the night in a motel which had shag rug inthe bathroom, extensive cigarette burns on the bedspread, and a shower headwhich was shoulder height!

We met early for breakfast at the Plains Caf. This is Douglas’ record-breakingcaf which has been open 24-hours-a-day, seven-days-a-week, for 195,804consecutive hours. I know this because I watched the octogenarian owner changethe homemade sign that declared the number of hours while I munched on mybreakfast. You’ve got to love small towns.

Takeoff from Douglas was finally accomplished at 0800. We were delayed becausewe could not get that three-on-the-floor Impala out of second gear. Also, thefuel truck was out of service, so we had to push the aircraft from one end ofthe tarmac to the other to the stationary pump. The pump then would not start,which took another 15 minutes to fix. We finally took off and flew to Gordon,Neb., at about 5,500 MSL (about 600 AGL). We descended as the ground descended,maintaining 600 AGL until we landed at Gordon, field elevation is 3,560. 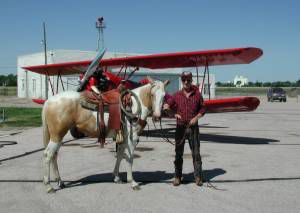 In Gordon, we were met by the lineman who road up on horseback. (I am NOT makingthis up – I’ve got the photos to prove it!). We filled with mogas, which makesthe W-670 purr, whereas avgas makes it sputter and kick (even with MarvelMystery Oil). Gordon is just one of those wonderful Midwest places to drop in.

On to Wagner, S.D., where the database states mogas is available, which was ourselection criterion. (Once there, of course, the airport manager told us theyhave not had it for 20 years!) Even thought the ground was now less than 2,000feet MSL, we flew at 7,500 feet to get the cooler, calmer air to keep Sarahfeeling well. Wagner has one paved and two grass runways and since the wind wasright, I landed on grass for the first time since the restoration. (I wishedDouglas had been grass.)

On the way into Wagner, I started getting fluctuations in my oil pressure. Itturned out that this wasn’t a mechanical problem, but only the result of the oillevel dropping to four quarts. The Flaglor oil tank holds three gallons, but isnot happy below six quarts since the intake from the oil tank gets air sucked induring the sloshing of an almost-empty tank. The 220 horsepower radial was notleaking or burning more oil than it should (it was freshly-overhauled, too), Ihad not just elected to add more oil when the level hit six quarts. I vow not tomake that mistake again.

The next leg was to Fairmont, Minn. Since Wagner did not have a courtesy car orother means to get to a restaurant, we decided to hit a larger airport to eatdinner. Fairmont was on the way so we went for it. We initially climbed to 9,500feet to clear some broken clouds but instead of stopping, they seem to goforever. I made a diving descent through a large hole and flew on to Fairmont at3,500 below the deck. We arrived at Fairmont otherwise without any problems.

After topping off, the FBO manager lent us his truck (the two courtesy cars werealready out) and we had burgers at lakeside in town. I elected to go on to LaCrosse, Wis., after dinner since we still had daylight, and a RON in La Crossewould mean we could then make Oshkosh in about 90 minutes early Monday morning.

La Crosse was about 90 minutes from Fairmont and has a towered airport. It wasthe first time in the entire trip that I had to use the handheld radio. Afterlanding, we ran into nine other pilots also heading for Oshkosh the next day,flying in aircraft ranging from an Interstate to a Yak. We arrived at 2000 localand had enough sun and noise even for open cockpit devotees.

The totals for the second day were 667 nautical miles, 8:18 trip time, averagespeed of 80.4 knots, and a maximum ground speed of 116 (clocked during thatdiving descent to get through the clouds). 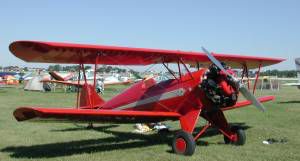 Monday morning, we left La Crosse at 0800 for Oshkosh. Traveling at 300 to 500feet AGL, we headed for Ripon and the VFR arrival procedure at Wittman field.Flying low over Wisconsin means paying attention, since this part of the worldhas some high radio antennas and we were definitely flying below their tops.While I did slow “S” turns, Sarah looked for antennas. I also waswatching my portable GPS to skirt the big Volk MOA military airspace in westernWisconsin.

Arriving at Ripon is always like popping a cork on a champagne bottle. Myexuberance was uncontrolled. It is fun to look for traffic, and I love it whenthe controller says “red biplane, rock your wings!” I was so excitedthat I turned in front of a canard aircraft thinking I could outpace him. I knewthings were different when he flew right over me and took the lead. That wasokay, since it allowed me more time to set up my final approach.

After landing, I taxied over to the Rubber Chicken campground where the bestpart of Oshkosh was waiting – all the pilots and friends from all the previousOshkoshes were camping. The friendships we make at Oshkosh are everlasting.