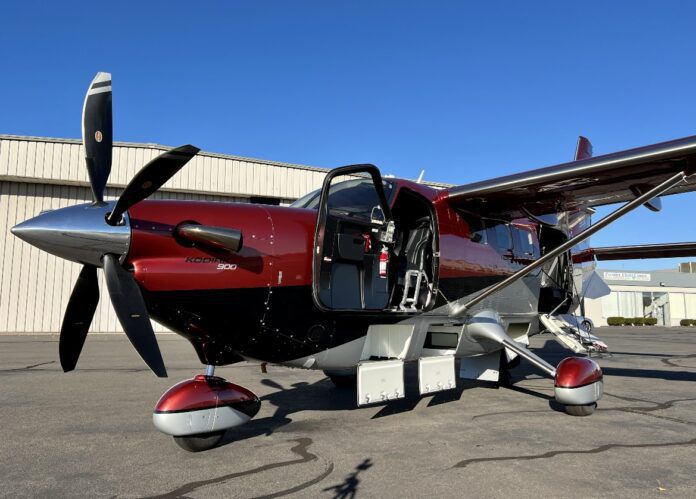 With four choices of turboprop singles in the lineup, Daher’s static display at the NBAA-BACE 2022 gathering in Orlando this past October was a busy place. The main attraction was the clean-sheet FAA-certified Kodiak 900, an airplane with long delivery backorders and sizable demand from a diverse group of customers—from private owners to air ambulance, law enforcement and cargo and freight haulers. Based on the 900’s demand alone, I would say Daher’s purchase of Quest Kodiak in October 2019 was a smart move—and a healthy shot in the arm for the already strong Kodiak product.

With an integrated three-bay cargo pod and a 3630-pound useful load, the $3.6 million (typically equipped) 10-seat Kodiak 900 isn’t a replacement for the Kodiak 100 Series III backwoods turboprop, and Daher said the new 900 hasn’t taken sales away from the Kodiak 100 bush plane. At NBAA-BACE 2022 Daher’s CEO, Nicolas Chabbert, told me operators pick the 100 and 900 for different reasons. Spec’d at 210 knots true at 12,000 feet, the draw for the 900 is its speed and efficiency, plus hauling capability and a refined cabin. Buyers needing a load-hauler for the deep outback and for water ops focus on the $2.2 million Kodiak 100, which cruises at roughly 40 knots slower. To date, 313 Kodiak 100 models have been delivered, with 326,000 flight hours flown fleet-wide. Moreover, it’s been clear that Daher is sharply focused on the Kodiak product line.

Since the 2019 acquisition, Daher has beefed up the Kodiak’s Sandpoint, Idaho, production site, which includes a 9000-square-foot paint facility—a $2.7 million investment that really stepped up the paint quality on the Kodiak line. It also introduced the Kodiak 100 Series III with an increased 7255-pound landing weight, higher maximum zero-fuel weight for more payload, a refined cabin and plug-and-play fittings for the Aerocet composite amphibious floats. The 100 series III is powered by a 750-SHP Pratt & Whitney PT6A-34 and has a 3530-pound max useful load.

The Kodiak 900 has been years in development and Daher brought it over the finish line in earning the FAA’s latest Part 23 Amendment 63 certification. Sandwiched between the TBM 910 and TBM 960 products, the Kodiak 900 invites step-ups from high-performance pistons, especially business owners with a need to haul up to 10 people and lots of stuff. Plus, in a hard insurance market where underwriters lose their mind at the thought of seniors and newbs at the controls of a turbine, the 900 should be a lower risk. While it has no shortage of performance with a 900-SHP Pratt PT6A-140A, it has fixed landing gear, a non-pressurized cabin, a stall-resistant wing and a healthy level of flight envelope protection from the Garmin G1000 NXi’s GFC 700 autopilot—a system that by now should be familiar to many. Still, I wondered why the airplane doesn’t have FADEC/autothrottle or Garmin’s emergency Autoland system and these were cost-based decisions, according to Daher Kodiak. These features are standard on Daher’s Garmin G3000-equipped flagship TBM 960.

Like the Kodiak 100, the new 900 is a decent short-field performer, getting off in 1015 feet at its 8000-pound max takeoff weight at ISA conditions, with the 900-SHP Pratt pulling strong to the airplane’s 25,000-foot operating ceiling, although Daher Kodiak’s chief demo pilot, Mark Brown, told me that pilots will typically fly the Kodiak 900 between 8000 and 12,000 feet. It’s equipped with a 10-place oxygen system for cruising higher. The published no-wind landing distance is 1460 feet at ISA conditions at max takeoff weight. With its wheel fairings (responsible for an extra 10 knots of speed) and smaller, higher-pressure tires you won’t be taking the 900 into tight gravel bars or landing on the side of mountains, and that’s why demand for the Kodiak 100 bush model will continue. Both airplanes share the same wing and empennage.

Nobody can argue that Daher’s oversight of the Kodiak product line isn’t a good thing for both the 100 and 900’s future. After all, Daher has long proven itself with the hugely successful TBM turboprop line, knowing how to make turboprop singles go efficiently fast with a healthy dose of styling, comfort and standard tech. And not insignificant is that Daher knows how to support the product and treat the customer. It’s not without at least some competition in the utility turboprop-single market, of course. Owners eyeing a new 900-SHP Kodiak 900 will surely look at Textron’s venerable 675-SHP fixed-gear Cessna Caravan, which has a max speed that’s roughly 30 knots slower, a 3305-pound useful load and can carry between 10 and 14 passengers.

Sales for both the Kodiak 100 Series III and the new 900 have been brisk, according to Daher Kodiak, and buyers will wait at least two years to bring either airplane home to the hangar.

Read a full report on the Daher Kodiak 900 in the upcoming December 2022 issue of sister publication Aviation Consumer magazine, and link to the video demo of the 900 below.