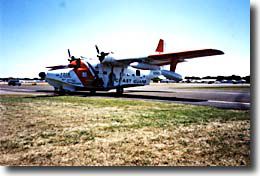 What a monster. What a behemoth. What a ride! TheGrumman Albatross is the biggest in the line of a fleet of fabulousflying boats. The Widgeon, Goose, Mallard and Albatross make upthe Grumman line of flying boats in ascending order of size—andsize is what the Albatross has. You’d better bring your fortyfoot ladder to pre-flight this flying boat and you’d best notbe in a hurry to leave. Preparing to take a trip in an Albatrosstakes some major preparation. If your style of flying is runningout to the airport, completing a five minute preflight, kickin’the tires and lightin’ the fires, don’t get an Albatross. On theother hand, if unabashed fun, power, freedom and a mega-dose ofnostalgia are interesting to you, climb aboard.

After ogling adequately at the interior size of thisaircraft (which I’d liken to a floating hotel), the uninitiatedpilot is led to the flight deck. After passing a radar/electronicsbay on the right which is larger than the cockpit of a Bonanza,you must step through one of those submarine-style waterdoors. Pilot, copilot, and engineer’s seats are nestled amongwhat appears to be a pipe organ of levers, switches and dials.The throttle quadrant is overhead along with items such as theRudder Boost (more on that later) and a huge radio rack behindthe pilot, next to the engineer. 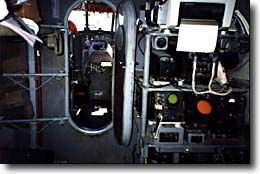 The preflight checklist is done by both pilot andcopilot after going through a very professional cockpit flow.The master begins playing the pipe organ and the big radials spin,pop, and belch the appropriate smoke, then rumble to life. It’sBIG… and it’s LOUD. Both pilot and copilot have theirwindow open, elbows out and the hatches above each are also open.

The behemoth taxis out to Runway 9 and the checklistcontinues to roll. The run up is done at 2100 rpms and everythingis ready for departure. As the Albatross pulls into position,a crowd gathers along the fence to watch it depart. The throttlesare advanced and the drone escalates in intensity and pitch. Webegin a tentative roll, the rudder boost has been engaged to helpthe pilot control the beast. Huge aileron inputs are added forthe mere ten degree crosswind component. As the big bird liftsfrom the runway, the nose is pushed over and it skims along afew feet above the concrete. The main gear retracts into the wellson the side of the fuselage as the nose gear sucks up into thenose. After slowly gaining speed from the 70 mph rotation and80 mph takeoff the Albatross climbs out at 100 mph IAS.

Oshkosh sinks behind us as we head out over LakeWinnebago. The pipe organ is being played in cruise. Their isno time in an Albatross flight where one can sit back and relax.There is always something to do! The Albatross circles the lakeand begins its descent toward the water. The checklist spins byas the copilot works as hard as most pilots do to get things inorder. Turning an airplane the size of a house into a boat ofthe same dimensions takes some preparation. 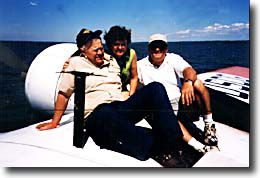 The cruise speed of 145 mph IAS is reduced to 100mph. The gear is checked UP! A new experience for the uninitiated.The Albatross is headed into the wind and the water level of thelake appears to rise. As it skims across the lake at about 10ft. AWL (above water level), the throttles are retarded and theairspeed decays to 70 mph, where the chatter of the chop can beheard and felt along the rear of the keel. The passengers’ windowsin the back are covered with spray and it appears as though we’regoing to become das boot. The spray moves forward alongthe hull and the pilot and copilot panic as they realize thattheir windows are still open. Just as they close the windows,the bow (remember, a boat doesn’t have a nose) is covered in acascade of spray akin to a ride at Disney World. The Captainannounces, "Holy Mackerel, Kingfish! We’s boatin’ ’roundLake Winnebago."

The pilot demonstrates the ability of a seaplaneto sail by showing that by cross controlling ailerons and rudder,one can actually have some minimal control over where you’re going!Emphasis on "minimal."

The crew and passengers climb out the hatches andcrawl out onto the top of the fuselage and wings. There is somethingweird about the image of floating around a lake in formation witha couple of big radials and three-bladed props—but, trust meon this one, you can get used to it!

After the obligatory sunbathing and photo session(because the boys at the hangar back home ain’t gonna believethis one!), everyone crawls below. Yep, "below". Anotherboat term. Hatches are closed and secured and everyone assumesthe airplane position (never seen a seat belt on a boat!)

All takeoffs in an Albatross should be made directly into the wind. Zero crosswind component. A little cross windcomponent adds exponentially to the excitement quotient. An attemptat a downwind takeoff can be lethal. The behemoth begins pushinga wake and the first seaplane pitch up comes quickly. The throttlesare being played by the copilot in an attempt at using asymmetricthrust to keep her running into the wind while the pilot is usinghuge, no, gargantuan, aileron inputs to keep the pontoons outof the water. This is a gangly, ugly, almost out-of-control adventurewhich is easily lost. There is no shortage of adrenaline in thecockpit. The wind shifts and the attempted takeoff is abortedsince she can’t be turned into the wind at this no-man’s-landspeed. Between dead idle and fully on the step, there is too muchmass to safely turn her. She settles back into the water and thewhole symphony begins anew.

This time the efforts are rewarded with a secondseaplane pitch up and the pilot pulls the big yoke to his chest.The monster attains the step and the airspeed indicator climbsto 60 mph. A long takeoff roll on the step (we’re talking loooooooong,sports fans) ensues and we cross Lake Winnebago like a speed boat.At 80 mph IAS, she simply leaves the water. No rotation, no pullingback on the yoke, she just flies when she’s good and ready—andnot before. 40-50 inches MP and 2500 rpms and she’ll eventuallyreturn to being an airplane. 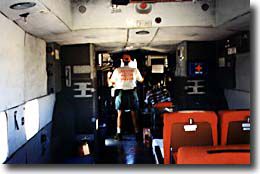 Back inbound to OSH she enters the downwind and onewould think to expect a less adventurous landing on the concrete.Au contrare! The pipe organ’s performance is not over.The mains on an Albatross are wider than the Goose’s and Widgeon’s,but there’s a lot of mass here. She is greased on and turned offthe runway. The Ford Tri-motor is blocking the runway and we bothmust take to the edge of the taxiway on our respective sides.Somebody hollers "STOP, we’re gonna hit a Spam Can,"from in the cabin and we notice that the right pontoon is about6 inches from creasing the upper wing tip surface of a T-34 parkedon the end of the row. This is one BIG airplane to move aroundand I guess everything else does, in fact, look like a Spam Can!

After her mixtures were pulled back, I sat motionlessin the engineer’s seat while the crew in front of me negotiatedthe shut-down checklist. I’m very happy to be living in the computer/informationage, but I now have a better understanding of what true romanticismis. This is it. Gangly and clumsy on the ground, but as gracefulin the air as her namesake, the Grumman Albatross is a time warpexperience which can be duplicated in few places on this earthtoday.