You will need RealPlayer to hear OSHtalk.

Saturday OSHtalk (July 29, 2000) — After a day of fog and low ceilings at AirVenture 2000, the sun slowly burned through the haze and clouds so that VFR pilots could start for home and the airshow could take place. Your OSHtalk host spent some of his time by the runway watching landings and takeoffs and can’t help but wonder whether there are fewer airplanes flying in this yea, based on the number of open parking spots near the OSHtalk airplanes in the North Forty. Tonight, OSHtalk’s host, Rick Durden, had a lengthy conversation with Armand Vilches, an insurance broker with more than 15 years in the aviation business, about the rising cost of aviation insurance. Armand brought an interesting perspective to the discussion, since he is an aircraft owner and a flight instructor, and so knows the business from the side of the desk as an insurance underwriter as well as from the side of the person buying insurance. During the discussion, Armand explained that we are in for a difficult time. Not only are rates going up, but also it is increasingly difficult for pilots and

owners to purchase the level of insurance coverage they may desire. Armand also explained the danger of insurance policies with “sublimits” — that is, internal limitations on the coverage. Armand and Rick took specific insurance questions from helicopter operator Anne Umphrey and flying club member Jim Thomas. Listening to Armand explain aviation insurance as it is today is a must for any pilot or aircraft owner. EAA’s AirVenture has historically been the destination of a various groups of aviators who make arrivals en masse. Most of those groups tend to organize formations of similar airplanes, such as Mooneys or Bonanzas, which helps minimize relative speed

problems for their formations. A new mass arrival this year had a far more challenging task: putting together a formation of airplanes that ranged from Piper Pacers to a Glasair. This unique group was the first to consist of airplanes all flown by women pilots-in-command. After their successful arrival, Judy Dixon, Kathie Richey, Mary Corrington and Abbie Friddell joined OSHtalk host Rick Durden to describe the challenges they went through to organize and bring the Women With Wings Caravan to AirVenture 2000. Because the FAA also needed a “short” name for the flight, the group created a shorthand title of “chick flight.” At first the members had some resistance to the name, but as they thought about it they thought it might prove less threatening to men (it did) and could be a way to break the ice when describing what they were going to do (it was).Judy and Kathie flew their Piper Pacers from Oregon, and Mary flew her Mooney Cadet, without either GPS or VOR receivers, all the way from Oregon as well. During the conversation, they told Rick that they received support from the EAA, but, shockingly, no response or assistance whatsoever from the 99s, the women pilot’s organization.

After all of their hard work, the flight into Oshkosh was a success. While the pilots told Rick they were still decompressing, they agreed that they all want to do it again. After all, they’ve just done it in the last year of a millennium; it would be quite appropriate to do it in the first year of the next one. For those who want to join in the flight next year contact the group athttp://www.ccountry.net/~chicks. 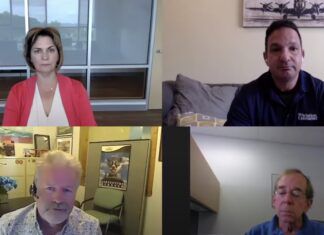