Aspassengers disembarked from a Continental Express Embraer 145 regional jet atMemphis International last Wednesday, a young woman stuck her head into thecockpit to ask, “Are you all going to the Women in AviationConference?” – an appropriate question, since the captain, the firstofficer, and the lone flight attendant all were women. Once the words were inthe air, other passengers chimed in; strangers greeted strangers young and old,taxis into town were shared, and so began the camaraderie and networking thatwould characterize the next three days in Memphis. 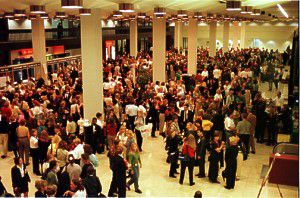 ByThursday morning, hundreds of people were noisily queued in the lobby of theCook Convention Center, drinking coffee and waiting to register, to sign up fortours of the FedEx hub, or to arrange banquet seating. Upstairs, 179 exhibitorsworked frantically to put the finishing touches on their displays before theopening ceremony at 1:00 p.m.. Workshops for aerospace educators and aviationmaintenance technicians were already under way. College students, women inairline uniforms, job-hunters in business suits, World War II veterans, a babyor two, and a smattering of men mixed and mingled as the conference got going.

When the exhibit hall opened, lots of vendors were there to sell theirproducts – Cirrus, Garmin, EAA, Jaguar, schools and flight training academies- but many came to pitch their companies as a great place to work, and find newrecruits. FedEx took pilot applications on a desktop computer; America West waslooking for qualified women to help fill 250 cockpit seats this year; Comairneeded 30 pilots a month; and even the NTSB had jobs posted, including a deputydirector for the office of aviation safety, starting pay $115,811. NASA handedout business cards with the address of its Internet job bank. Raytheon supplieda 25-page listing of opportunities in engineering, marketing, administration,and flying at its sites around the country. Avionics technicians and aircraftmechanics were in demand. If you’re a woman looking for an aviation career, thiswas a great place to be. 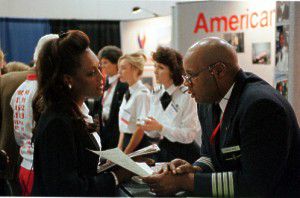 Thefocus on careers carried into the afternoon seminars, which began with sessionson public speaking and interviewing skills. Becky Dean and Kit Darby, ofAviation Information Resources, emphasized that details count for everything inan interview – from the cut of your jacket and the color of your stockings tothe tone of your voice and the look in your eye. A couple of hopeful youngvolunteers let themselves be subjected to a critique, and went away with aclearer idea of what will make or break them on that crucial early step on thecareer ladder. What do you do if your captain tries to bust minimums? You’dbetter show that you’d be willing to speak up and take control.

Raytheon Aircraft Company sponsored the evening’s opening reception, layingout the first of many food-fests, with huge piles of shrimp, fresh vegetables,and hot hors d’oeuvres for the crowd. Aerobatic champion Patty Wagstaff took thepodium, and showed off a video of the Raytheon T-6A Texan II military trainerthat she helped develop. She said its cockpit is the first designed toaccommodate female flyers. Surveying the crowd around her with a broad smile,she declared, “This is woman power in action!” and a cheer went up tothe rafters.

NASA Teams Up With WAI

Space Is The Place To Be… 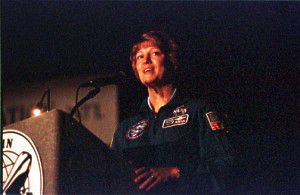 Earlyon Friday, NASA’s first female space shuttle commander, U.S. Air Force Col.Eileen Collins, joined with officials from NASA and Women in AviationInternational (WAI) at a press breakfast to unveil an educational posterpromoting aviation and aerospace careers for women. Featuring dozens of aviationprofessionals from barnstormers to astronauts, the poster is part of a uniquepartnership between NASA and WAI. At last year’s WAI conference, NASAAdministrator Dan Goldin announced an effort by the two organizations toencourage young women and girls to explore careers in engineering, aerospace,and education. WAI members were asked to talk to school groups, act as mentors,and spread the word that science and math skills are crucial. The free posterswere designed to help in that effort. Learnmore about NASA’s Women’s Outreach Initiative.

Collins spoke with passion about the “human side” of being inspace. When she was commander of a shuttle mission, she said, she made sure hercrew took a break from work, turned down all the cabin lighting, and took sometime to simply stare out the window at the incredible view below. Someday, shesaid, she hopes that everyone who craves the experience of being in space canhave that opportunity, whether as a tourist or a scientist. She also said therehas been some talk at NASA about sending up an all-woman crew on the shuttle, tohelp with research on women’s health. 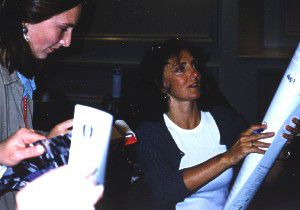 Onehighlight of the conference was its impressive roster of speakers, starting withWagstaff on Thursday and continuing in Friday morning’s general session. LaneWallace, a columnist for FLYING magazine, opened with an inspirationaltalk describing her own serendipitous career in aviation, and urged herlisteners to follow their hearts in making life decisions. She was followed byHansel Tookes, Raytheon’s CEO, who said he would like to see many more womenworking in his company, “…not just because it’s right – it’s anecessity. We need you. Your country needs you, the world needs you.”That’s a message women in aviation have waited a long time to hear.

Collins narrated a video about the mission she conducted last summer, showingher crew, the shuttle launch, views of the earth from space, and the X-rayobservatory they deployed into orbit. She encouraged the women at the conferenceto continue to excel at their work, and to persist despite setbacks. Hersincerity and enthusiasm brought a standing ovation from the audience. 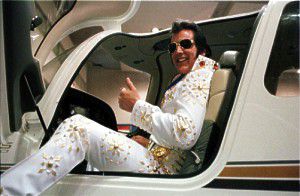 Themorning finished up with the inevitable visit from Elvis himself, complete withsunglasses and white sequined jumpsuit. After serenading the crowd with “ICan’t Help Falling in Love With You,” he haunted the busy exhibit hall,where he posed for pictures, made a few moves, and then was never seen again. Atthe afternoon sessions, career advice drew the largest crowds. Women lined up tohear about business etiquette and the secrets to professional success. Over andover again, aspirants were reminded of reality – “When it comes tointerviews, although theoretically you are equal – you’re not” – but theywere encouraged to deal with these realities and not accept them as barriers toachievement.

Friday night wound up with a barbecue buffet and tours of Elvis Presley’sGraceland mansion and his two airplanes, a Convair 880 with a custom interiorand a Lockheed JetStar. The Convair, named Lisa Marie, featured a bedroom, adining room, and a living room with chairs and sofas upholstered in velvet. TheJetStar had a fairly standard interior, except for a strange lime-green andbright yellow color scheme. Clearly, nobody questioned the King’s taste.

Encouragement Is Nice, But A Free Type Rating Is Even Better 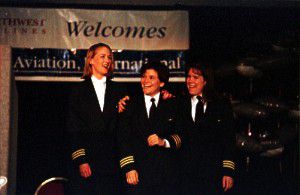 AtSaturday night’s banquet, scholarships worth more than $410,000 were awarded to38 young women, ranging from $500 or $1,000 cash to help a student pilot orA&P trainee, to type ratings in heavy iron worth over $10,000 each. Manypast scholarship winners have been hired by the donor airline after completingtheir training. WAI is justifiably proud of its scholarship program, and thedollar amount kept growing all through the weekend as donors upped theirgenerosity – often because they had so many qualified applicants that theycouldn’t choose just one.

Also Saturday night, four women were inducted into the International Women inAviation Pioneer Hall of Fame. Katherine Cheung, who learned to fly in 1932, wasthe first Asian-American aviatrix in the U.S. Jerrie Cobb was the first woman toundergo astronaut selection tests, in 1959. She passed all three phases of thetests, but was not allowed to fly into space because of her gender. The lateMarion P. Jayne was a corporate pilot and air race innovator. Louise Thaden, arecord-setting air racer, was also inducted posthumously.

Next Year, On To Reno

Although the conference is in its 11th year, WAI as an organization is onlyfive years old. It differs from the venerable Ninety-Nines in that in that youdon’t need a pilot’s license, or even have to be female, to join – everyone whowants to take part is welcome. This openness has been a boost for theorganization, as its membership expands beyond pilots – who are about 70percent of members – to include dispatchers, air traffic controllers, flightattendants, business operators, and educators. Two groups have already spun offto form their own organizations – Women in Corporate Aviation and theAssociation for Women in Aviation Maintenance. These special-interest groupscame together through WAI, and hold their meetings at the annual conferences.

PeggyBaty, president of WAI, told AVweb that she expects to reach 25,000members within the next 10 years. “Our best endorsement is word ofmouth,” she said. “We’ve only just begun, in terms ofmembership.” Next year’s gathering will be held March 22-24 in Reno, Nev.,where Baty said everyone should be able to fit into one or two big hotels -avoiding this year’s transportation snafus in Memphis, where the shuttle-bussystem couldn’t cope with the thousands of attendees scattered among 14far-flung hotels.

For many of the members of WAI, aviation is clearly more than a career choice- it represents a full-throttle approach to life. That shared passion broughttogether a search-and-rescue pilot from Alaska, a flight attendant from Peru, acorporate lawyer from Chicago, a 747 captain, and thousands more in Memphis. Andthe message was clear, as WASP Vi Cowden said: “If we could do it then, youcan do it now…. Go out and do the thing that you want to do.”

Just try and stop them.

For more information about WAI, be sure to check out the organization’sweb site.