The 12th Annual Women in Aviation International (WAI) Conference, held this year in Reno, Nev., March 22-24, brought together major airlines, commuter carriers, trade associations, the federal government, the U.S. armed services, engine and airframe manufacturers and a host of others with their target audience: the woman aviation professional. When it was all over, representatives of those major industry segments and many others totaling some 113 exhibitors courted and wooed over 3,300 WAI attendees, setting a record as the largest and WAI’s most successful conference to date, according to the association. Indeed, this year’s event was in stark contrast to the first WAI conference, which was held in Prescott, Ariz., in 1990. At that initial gathering, a comparatively paltry 150 attendees and five table-top exhibits were present. But, unlike most other aviation-industry events, the commodities being offered were not sleek, shiny new aircraft, the latest in whiz-bang avionics or new, more powerful engines. Instead, the commodity was much more basic: the job of their dreams and a career in aviation.

Female candidates weren’t the only ones signing up as WAI members and attendees at this year’s WAI conference. A record number of men signed up, also, to submit their rsums, to network with their peers and to learn as much as possible from the educational sessions and professional development seminars.

Training And Education For Career Development 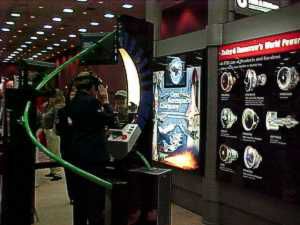 The overall feeling of a WAI conference is much different from any other industry “show.” There is very little competition among either exhibitors or attendees and huge amounts of mentoring. Old and new friends compare notes and trade insights on how to best focus their careers. Some 36 educational sessions provided an wide range of information for newcomers to the industry and to old pros – who thought they knew it all until they sat in on a particular session – alike. From air traffic control, to human factors in aviation maintenance and inspection, to refractive surgery, to work and family, these educational sessions gave something to everyone who attended.

In addition to the educational sessions, Inspection Authorization Renewal seminars for maintenance technicians and an Aerospace Educators Workshop were also held, as well as two extremely informative Professional Development seminars. “Delivering Dynamic Presentations,” led by Gary Kral, manager of employee development at Cessna Aircraft Company, left his 300-plus audience members with tips and techniques for their public speaking. “Career Care,” another seminar presented by Cheryl Cage, president of Cage Consulting, provided a packed room with positive ways to interact with co-workers, supervisors and the general public. Afterward, many attendees reported that they closely related to the real-life examples Ms. Cage presented. 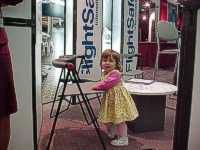 In stark contrast to most other aviation trade shows, the flavor of this year’s WAI conference was enhanced by children: Some mothers with careers chose to not leave their children at home. Dads and grandparents were brought along to assist in the caring while moms took care of business. These outgoing, happy children were welcome additions to the conference since they were seen and very seldom heard, proving that mom can have a rewarding career and raise extraordinary children at the same time. 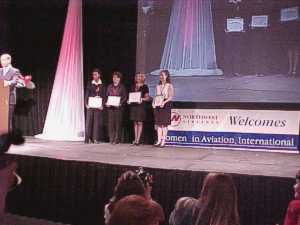 WAI, as an association, has made great strides in supplying scholarship assistance to those who have chosen an aviation career. At this conference, some $901,925 from such name-brand industry participants as Airbus, Boeing, American Airlines, Cessna, Bombardier, Delta Air Lines, FedEx, Jeppesen, Pratt & Whitney – among others – was distributed to 99 women (572 applied) in areas like dispatch, engineering, training and maintenance, to name a few.

On the last evening of this year’s conference, WAI gathered at the closing banquet to induct four into the International Women in Aviation Pioneer Hall of Fame, which was established in 1992 to honor women who have made significant contributions as record setters, pioneers, or innovators in aviation. Thirty-seven individuals and four aviation groups have been inducted since the program’s inception. This year’s inductees were:

WAI‘s founder and president, Dr. Peggy Baty-Chabrian, has assembled a board of directors including men and women from all areas of the aviation and aerospace industry. Conference volunteers served in every capacity to insure a successful meeting. The 6,000 WAI members include astronauts, corporate pilots, maintenance technicians, air traffic controllers, business owners, educators, journalists, flight attendants, high school and university students, air show performers, airport managers, writers, administrators, and others deeply involved in aviation.

Women in Aviation, International is headquartered in Daytona Beach, Fla., as a non-profit organization dedicated to the encouragement and advancement of women in all aviation career fields and interests. This 2001 WAI Conference fulfilled the association’s mission. The 2002 Women In Aviation International Conference will be held in Nashville, Tennessee.

(Click on an image to view a larger version)