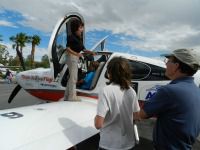 The Think Global Flight Initiative has received funding from the Wolf Aviation Fund as it gears up for a circumnavigation flight in support of a global effort to increase student interest in the so-called STEM (science, technology, engineering and math) subjects in school. Flight organizers have already involved 10,000 students in 10 countries (including 25 states in the U.S.) with projects to help with flight planning, navigation and logistics of the flight. Donors who want to be involved can buy a “Skyway” that will fund fuel for the flight. Judy Rice will be the pilot and she will be accompanied by navigator and relief pilot Fred Nauer. Rice said in an interview with AVweb the goal is to inspire and enthuse students all over the world in the “hard” subjects.

The flight’s Cirrus SR22 will launch from Sun ‘n Fun 2014 and head west. Rice will fly alone from California to Hawaii for weight considerations and then she and Nauer will hit dozens of stops from there. The duo will visit each of 25 “student command centers” that are now busy with projects related to the flight. Numerous aviation organizations and companies, including AVweb, are sponsoring the flight.