The 33rd annual Reno National Championship Air Races opened on September9, 1996 and with it brought both excitement and disappointment. In recentyears the “fastest motor sport in the world” has been slightly waning interms of participation and competition. However, the 1996 campaign showedgreat encouragement for there were a number of new unlimited racers on theramp this year. At the same time, however, the promise of new hybrid racingentries from Darryl Greenamyer, Matt Jackson, and Gary Levitz & BillRogers did not materialize. 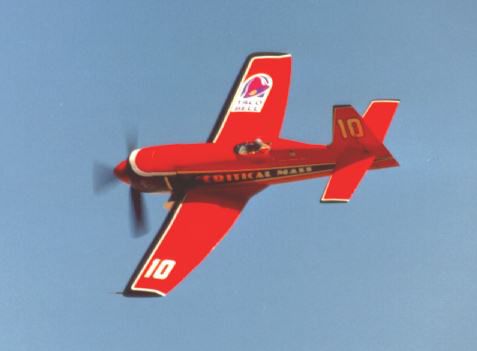 Tom Dwelle’s highly-modified Hawker Sea Fury.
Not a particularly competitive Gold racer, but certainly
one of the most colorful aircraft at Reno this year.

Defending champion Bill “Tiger” Destefani arrived at Reno with a brand newpropeller for his Mustang racer “Strega”; however, the so called “Tiger’sClaw” proved to be some-what of a disappointment because he only qualifiedat 465.516 mph. “Lefty” Gardner, a Reno favorite, failed to qualify due toa left engine in his ultra-rare Lockheed P-38 “White Lightnin’." 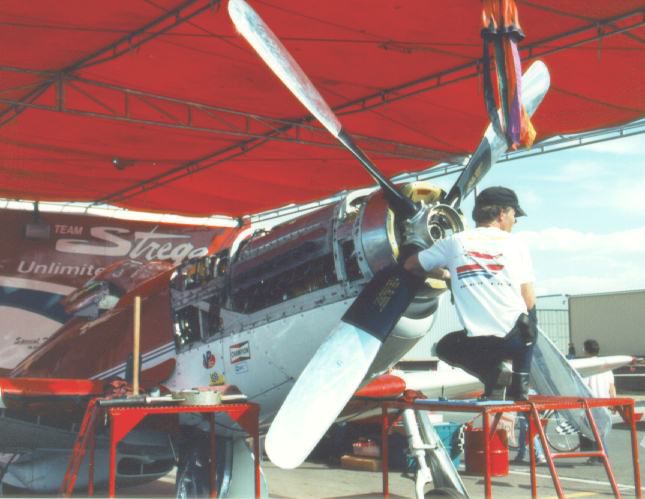 “Strega” gets its regular prop back, after the
new “Tiger’s Claw” proved disappointing.

Newcomer Steve Bolander’s Mustang “Mary Bear” blew its engine and coveredthe canopy with oil during the final hours of qualifying. Fortunately, Bolandershowed his piloting prowess by making a near perfect emergency landing. Allin all, 26 aircraft managed to qualify for the unlimited race pairing.

The heat pairings are broken down by qualifying speeds into three the categoriesof “1C” (Bronze), “1B” (Sliver) and “1A” (Gold). The top three qualifiersare exempt from competing on Thursday which is the first official day ofthe races.

The “1C” heat race was dominated by an invasion of Russian Yak 11 type aircraft.Thomas Camp and his “Maniyak” racer was first down the shoot to the scatterpylon and lead from start to finish with an average speed of 335.725 mph.Camp was followed closely by Sam Richardson and his R2000 powered Yak “CzechRide” and Rob Patterson’s P-51 “Lady Jo” with respective speeds of 310.773mph and 298.415 mph.

With the top three qualifiers out of the race, Bob “Hurricane” Hannah pushedhis Mustang “Voodoo Chile” to narrowly win the “1A” heat with a speed of406.254 mph. However, the competition was tough for the margin of victoryover the second and third place finishers, Bill Rheinschild and Nelson Ezell,was less the three miles an hour. 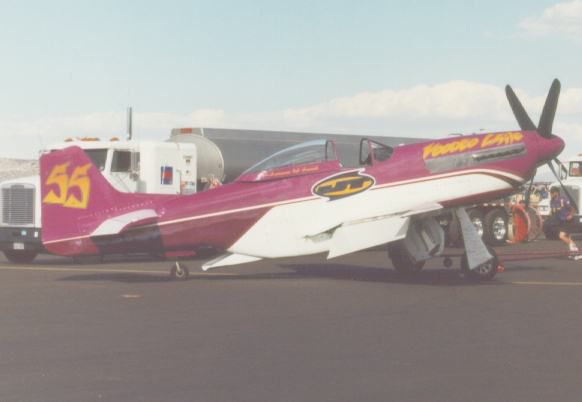 “Voodoo Chile” had the fastest time in Thursday’s 1A heat.

The main story on Friday was the weather. A front that was approaching fromthe west took an unexpected turn to the south and saturated the Reno vicinitywith rain and high winds. As a result, the unlimited heat races on Fridaywere canceled.

The speeds in the Heat 2B Silver were again on the rise as C.J. Stevens’in his Hawker Sea Fury and Stu Eberhart’s P-51 finished one/two with speedsof 374.684 mph and 374.512 mph respectively.

David Price and “Dago Red” was the first to reach the scatter pylon in theGold Heat 2A and again let it be know that he did not come to Reno to finishbehind “Strega” or “Rare Bear” as he managed to win the race with an averagespeed of 479.929 mph. Coming in second was the reigning champion “Tiger”Destefani at 477.632 mph, followed by John Penney and “Rare Bear” who wasclearly having some minor engine trouble midway through the heat. 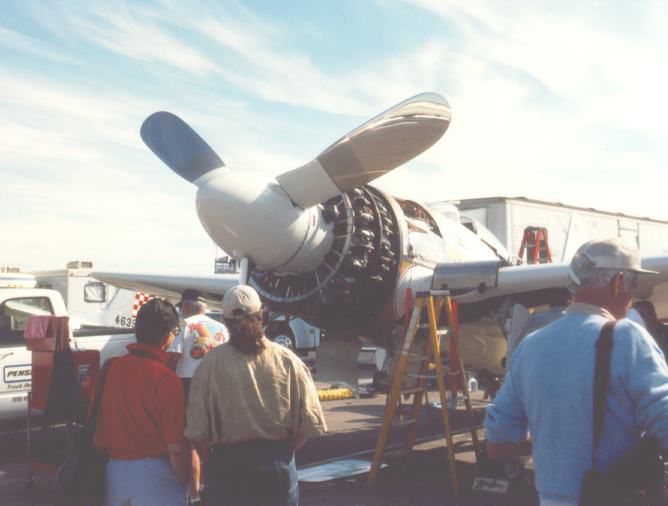 The heat competitions on Saturday are usually good indicators of what racefans can expect in the final money races and this year was no exception.All three of the unlimited events proved to be very close and excitingcompetitions.

The Bronze Race got underway at approximately 1:30 P.M. with Jimmy Leewardand his P-51 “Cloud Dancer” taking the low course by virtue of being thefirst to reach the scatter pylon. In the course of the next five laps Leewardflew an almost perfect race. With only about one half a lap to go Brent Hiseyand “Miss America” bent the throttle forward and managed to barely beat Leewardacross the finish line in one of the closest races in recent memory. Theirrespective speeds were 365.258 mph and 365.067 mph. 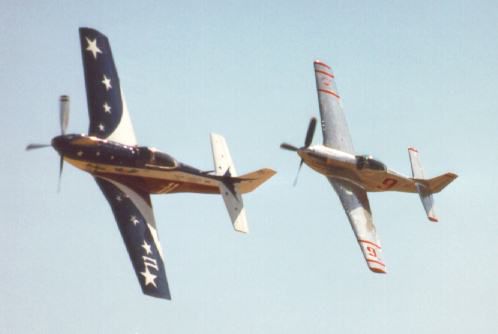 Not to be out done by the Bronze pilots, Stu Eberhart in “Merlins Magic”and Howard Pardue in his Bearcat fought for the lead over seven laps in theSilver event before finishing at 375.061 mph and 374.778 mph.

Next came the event the races fans had been waiting for. Speculation aboundin the racing pit area. Who would win? Would it be “Strega,” “Rare Bear”or possibly “Dago Red”?

The biggest question of the day, however, was how bad was the Bear’s enginehurt during Saturday’s heat race? At the start David Price took up wherehe had left off by speeding his plane to an early lead. However, high dramadeveloped during the second lap as John Penney declared a “Mayday” and pulledLyle Shelton’s mighty “Rare Bear” off the course and made an emergency landingas large amounts of smoking oil emanated from the left side of his engine.Before the races entered the eighth lap Bob Hannah, Bill Rheinschild, LloydHamilton, Brian Sanders and Howard Pardue had also dropped out of the race. 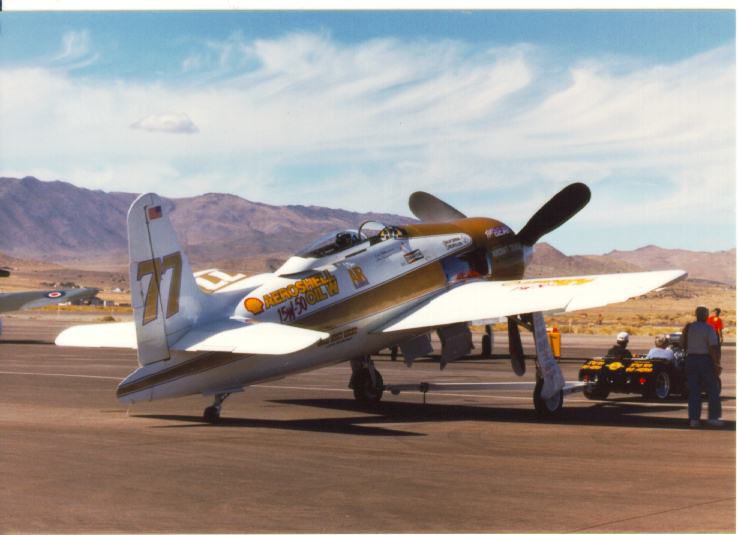 In the seventh lap, “Tiger” Destefani began to close the gap between hisracer and “Dago Red.” However, in the final lap he noticeably dropped backand it appeared that David Price had won the day as he took the coveted checkeredflag. Then the announcer stated that there had been pylon cuts. In the end,it was determined that David Price, in spite of flying a magnificent race,had cut pylon outer six during the fifth lap which resulted in a 16 secondpenalty (two seconds per lap). The penalty allowed Bill “Tiger” Destefaniand the entire “Strega” racing team to successfully defend their unlimitedgold crown with a final speed of 467.948 mph.

“Dago Red” crossed the finish line first,
but came in second due to a pylon cut.

After the race “Tiger” was asked why he throttled back during the final lap?He responded with, “you have to remember I had a front row seat and I sawhim cut the pylon. I just wanted to be close enough to win the race.” 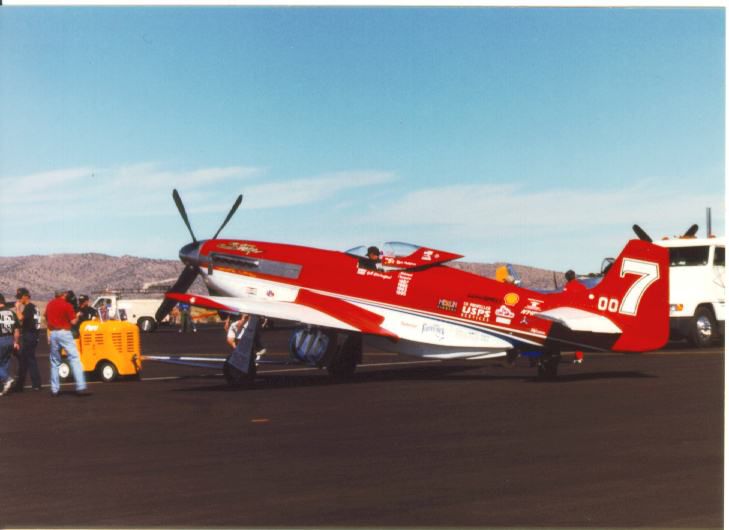 “Strega” getting ready for the Gold race.