A big part of the weekend airshows at AirVenture is the warbird special appearance, and a familiar part of those shows for 18 years has been the voice of Walt Troyer. His voice is instantly recognizable to Oshkosh veterans, and his knowledge of World War II, Korean War and Vietnam-era aircraft is encyclopedic. AVweb was invited to sit in on the announcers’ stand and observe Troyer last week as he described the aircraft in detail and gave the crowd a history lesson, all while following every move of the show activities.

Troyer served as a civilian instructor in the T-41 Mescalaro – perhaps better known in civilian circles as the Cessna 172 – and later worked as a pilot for a commuter airline, but by 1973 had gotten out of aviation altogether. For a number of years, he claims, he didn’t go near the business end of an airplane. But in 1978, a friend dragged him to Oshkosh for the EAA convention. After seeing the warbird show, he was hooked. He joined EAA on the spot.

In 1980, he began helping out on the announcing stand, mainly making housekeeping announcements. He got a break in 1982, when the primary announcer had a conflict and Troyer was asked to fill in. He soon learned that the action and the commentary amounted to a form of choreography, and proceeded to work on ideas with the show’s air boss to time the arrival of the airplanes. Troyer said he wanted to tell his audience a story and convey a sense of the history behind the airplane being showcased.

A Sense Of History 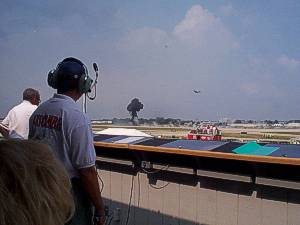 Troyer, a history buff, has put together some spectacles that long-time Oshkosh attendees still talk about. The 1985 salute to Vietnam-era aviation featured a simulated helicopter assault using two lifts of four UH-1 Hueys, with support from F-4s and even B-52s. Tapes made in actual combat were played over the PA system, adding to the realism.

The 50th anniversary of World War II gave Troyer and the Warbirds of America planners a lot of opportunities to showcase airplanes and events from the war. The low-level raid on Ploesti, Italy, oil refineries by B-24s was featured in a salute to veterans on the anniversary of the raid. The 1995 show, commemorating the end of the war, put together the largest group of WWII-era warbirds ever seen in the sky over Oshkosh. One hundred seventy-two aircraft converged on show center in a massive salute to WWII veterans. Such a display will likely never be seen again.

As The Story Weaves Around The Show 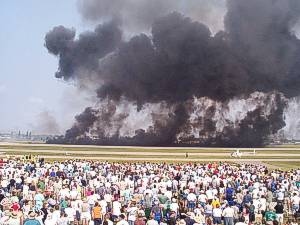 Troyer calls the show from a stool on the balcony of the EAA Communications Center, just south of the Aeroshell Pavilion. He works with an assistant, Jim Zazas, who monitors the airshow frequency and relays to Troyer when the various airplanes have been cleared to cross in front of the crowd. When he arrives at the announcing stand, Troyer discusses with Zazas some variations from the plan for the coming show. Because of an expected low ceiling, only the T-28s will pass overhead in formation.

As the show begins, several WWII-era fighters take off on Runway 36, in front of the crowd. Troyer, speaking without a script but referring occasionally to notes, weaves his description of each aircraft into a brief history lesson on the state of American aviation at the beginning of World War II. In the spirit of this year’s “Speed” theme at AirVenture, Troyer tells how aircraft speed increased from the beginning of the war to the end.

As a T-38 Talon streaks across show center, Troyer talks about the transition to jet aircraft, then segues into the Korean War, and asks the crowd to applaud for the Korean vets on the field. When three B-25 Mitchells pass show center, pyrotechnic explosions in front of the crowd send up fireballs and black smoke. Just after the last B-25 passes, a huge fireball, 600 feet long, rolls skyward, accompanied by a chest-thumping boom. “Come back tomorrow,” Troyer tells the crowd. “It will be 1,400 feet long.”

Troyer’s commentary is unabashedly patriotic and he ends the show with a few words about the sacrifices made by American flyers in 20th-century wars, as “Taps” is played and a missing-man formation flies by. Once the last note sounds, and the formation recedes to the north, Troyer gets off his stool and heads down the stairs to the field. AirVenture attendees have enjoyed another warbird show. Troyer hopes they’ve learned a bit of history, too.