AVweb asked various vendors at AirVenture this year about the status of all the promises we’ve heard in the last year or so about obtaining real-time weather information in the cockpit. The good news is that you can get weather in the cockpit right now. The bad news is that neither of the providers awarded FAA contracts last year have seemingly come very far in since then.

Echo Flight of Boulder, Colo., has a satellite-based system that is operational right now. Using a comm-like antenna on the top of your airplane, a small box mounted under your front seat and a proprietary yoke-mounted display, you can get METARS, TAFS and NEXRAD radar images on demand. Using the ORBCOMM low-earth orbit constellation, Echo Flight requests data and receives the data using their own microburst transmission technology that compresses the data giving it the necessary bandwidth to get images and text to the display on your yoke. The display is very bright and readable and can display lots of textual information when not displaying weather.

Garmin has announced that they will be using Echo Flight’s software and satellite system to display weather on their GNS 530 and 430 displays. Garmin also says they will adopt other technologies as they become available; including the FAA’s own FISDL standard. And, according to Arnav, a forthcoming software upgrade for these boxes will allow them to receive and display the FAA-provided FISDL data.

Echo Flight service costs $9.95 per month for limited service and up to $55 per month for unlimited use. The system also includes email access in flight. 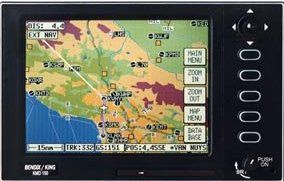 Meanwhile, at least one of the two FAA-selected providers is able to provide a TSO’d receiver and are close to certifying their receivers and will soon start deploying ground stations. Honeywell announced that users will be able to receive weather signals on the Bendix/King KDR 510 receiver and display it on FISDL-compatible versions of the Bendix/King KMD 550 and KMD 850 multi-function displays. Honeywell plans to deploy ground stations on the east and west coasts first, then fill in the high-density traffic areas before finally completing their CONUS coverage with the mountain states. They expect full coverage above 5,000 feet by the end of 2001. By AirVenture 2001, there should be enough coverage to really demonstrate how the system will work. 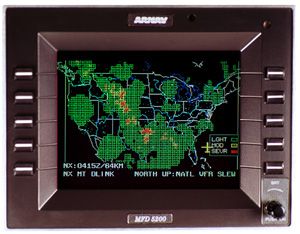 Arnav, the second provider to be awarded the FAA FISDL contract, will display weather on their MFD 5200, which is also capable of terrain avoidance and navigation displays. The company is offering two receiver modules, one – which received FAA’s technical standard order (TSO) approval just last week – is upload-only. Arnav also offers a second, larger “black box” receiver that allows two-way communication, including email, under the FISDL specification. On Sunday at AirVenture, FAA Administrator Jane Garvey cut an “electronic ribbon” to start the first ground station operating and as she did a display screen in the booth flashed the latest NEXRAD radar image. Arnav also expects to complete 5,000-foot coverage in about a year and a half.

Projected monthly costs for both the Honeywell and Arnav systems will be about $30 per month for weather graphics, according to FAA requirements both systems will allow uploading of textual weather like METARS and TAFS without charge.

Is That Your Final Answer?

So the answer to the question of “Where is my cockpit weather?” is: Some service is available today. But there will be more tomorrow. If you can’t wait for the “real deal” or don’t have the panel space/patience to wait for an installed MFD and associated receiver, you need to talk to Echo Flight.