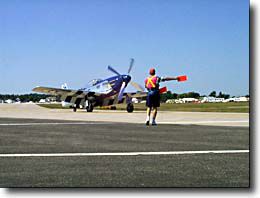 You have just worked your way through the excitement of the Ripon arrival, wrestled the airplane to a landing in the strong, gusty crosswinds at EAA AirVenture Oshkosh 1998, and rolled out onto the grass as directed by the controller, only to come face to face with someone wearing an orange vest and waving two international orange paddles. She signals you to taxi ahead along the grass where another person waves you on. The route you take to where you are directed to park may not be the most direct one, and may involve some stopping and waiting, but you eventually get parked and, in the post arrival exuberance, never give another thought to those folks who safely marshalled you to parking.

How does the EAA find enough qualified folks to stand out there among the whirling props, jet blast, and noise to keep ground operations more or less smooth?

AVweb rode with Fred Stadler, co-chair of Flight Line Operations, as things went from calm to hectic Tuesday morning at EAA AirVenture Oshkosh. The time we spent with Fred and other Flight Line Ops volunteers was eye-opening. 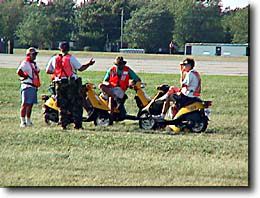 There are about 160 volunteers who help out with parking and marshalling aircraft once they leave the runway. Historically, the volunteers have come from the local area and have done an excellent job in a very hazardous environment. Most were not pilots but did well in keeping airplanes apart when operating on the ground. As the process has become increasingly complex with a greater and greater mix of aircraft in terms of size and type, volunteers who are pilots and have an innate sense of what an airplane will and will not do have become more and more valuable.

Just before I got to ride around with Fred, an Aeronca had ground looped after landing in the strong, gusty winds we are having here. The Flight Line Ops people had to move fast to get the airplane off the runway, while not adding to its damage. They did it. There was hardly a hiccup in the arrival stream.

I learned that Flight Line Ops personnel see the seamy underside of aircraft operations which few of us ever observe. I watched a crew replace a large yellow cone by a taxiway which had been hit by a taxiing airplane. As they worked, Fred recounted that this morning someone taxiing his 182 had decided he did not need to stop when the marshaller signaled to do so and taxied over a Port-A-John. No one could say whether it was occupied at the time. Another pilot taxied over a series of wooden stakes. He stopped, and looked things over while Flight Line crew members rushed over to look things over themselves. They noticed that our hero had obviously done some thing like this before, as the belly of the airplane had numerous scrapes and scratches. The pilot contemplated the situation for only long enough for the Flight Line Ops to eyeball the scratches, taxied away and departed.

One could get develop a bit of a jaundiced view of pilots after watching a few such events.

Flight Line Operations are responsible for parking the general aviation camping and transient parking aircraft. More so than in past years, they have been letting pilots say where they want to park within the general camping or transient areas. This has certain advantages for those who arrive early, but the parking personnel also wind up having to deal with a lot of requests from pilots which they simply cannot grant. Many pilots ask for extra space around their airplanes because “I have a big tent.” That would be nice to grant, but it means that someone coming later may not get to camp at Oshkosh. What is more disturbing is that when this is explained to the person who desiring more space, often the response is that he doesn’t care if it means someone else cannot get into EAA AirVenture. Band of Brothers, indeed.

In talking to the parking volunteers, we learned that they do not want to divert anyone to Fond Du Lac to camp. Some of the most painful comments were of Flight Line Operations volunteers who have had to tell pilots who had landed, with their families in the airplane, that they must take off again. That tears them up. They want to get as many airplanes into OSH as possible, but they want to keep pilots happy. Too often, they cannot do both. Then, EAA President Tom Poberezny gets a nasty letter from a visitor to the convention. 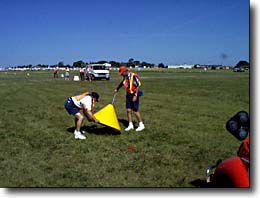 As aircraft arrive to camp, singles are generally directed to a particular row which is stacked with the airplanes alternating directions, tails toward the center of the row, until the row is full. Twins are directed to their own rows and parked in like fashion. The airplanes are placed as close together as possible, giving adequate, if not overly generous camping room and with the understanding that a twin generally will be carrying more stuff and people than a single, although that generalization is not always accurate.

The challenge arises when the airport begins to fill up. As masses of airplanes continue to arrive, it is simply not possible to “hole fill” those spots where airplanes have departed. The Flight Line Operations volunteers freely talk about trying to hole fill as much as they possibly can. Until one has seen the rate at which airplanes arrive, well over 150 per hour over Ripon and Fisk, with IFR arrivals one every five minutes and warbirds tossed in on top of that, it is difficult to conceive what the parking volunteers are facing. They simply cannot spot one airplane in row 27, then one in row 32 and one in row 56. Later in the show as several holes open up in a row the process becomes manageable. But right now, the day before the show, “hole filling” would be akin to trying to drink from a fire hose.

Parking volunteers also expressed amazement that a significant number of nose-wheel airplane pilots have never figured out that they should keep the elevator all the way back when taxiing on grass. The volunteers have seen the difference pulling the wheel back makes on propeller erosion or possible damage while taxiing, yet many pilots keep taxiing in with the control wheel against the panel. 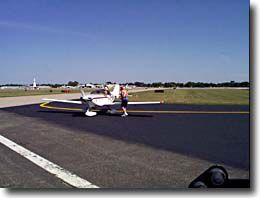 It is windy today. The tower is calling the wind 260 at 18 gusts to 25 and it is every bit of that. Pilots are landing on runway 27 and 18. Those on 18 are just plain working hard. No matter what runway they are facing, the persons marshalling have to sort the arrivals out and get them pointed to the correct parking area. Warbirds, homebuilts, antiques, classics and contemporary classics go south, general aviation aircraft built after 1960 go north. There is only one taxiway which connects the north and south side of the airport, it runs northeast off the north end of runway 18/36. That means the Flight Line Operations volunteers often are faced with several aircraft on either end of the airport desiring to go to the other. The noise level can get incredible as the jets get involved and, where taxiways intersect, the volunteers may have airplanes coming from four different directions to sort out. What makes it worse is that with the incredible noise level it is not possible to hear another airplane taxi up, which may be a threat. On top of that, the volunteers have to keep those airplanes in the pattern in mind, so that they can anticipate what the ground movements will be in the upcoming minutes.

It is a challenging and exciting job. People who have a feel for what airplanes can and cannot do and can think in three dimensions are the best for this job. There is a level of hazard involved, which, as we know in aviation, has a certain appeal to pilots, and those who stand out there in the heat and noise, do a great job. Most of the time the pilots understand that things are congested and are patient, but not always. After getting a feeling for the big picture, it will be a long time before I get upset with a Flight Line Operations volunteer at EAA Oshkosh. 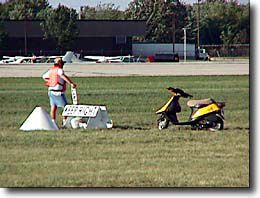 This year the EAA has a telephone number, 920/232-7820, as well as a Web page,http://www.fly-in.org/aircraft/parking.html, which is updated frequently and gives information on what is happening at EAA AirVenture. It also includes information when it will be next updated. Thus far the Web page and phone recording are being updated within minutes of the time promised and contain up-to-the-minute information on taxiway conditions and how full the parking areas are – “11:00 am on July 28, fly-in camping 70% full and fly-in parking 50% full.”

This year the Flight Line folks put out the word that arriving aircraft which held up signs saying where they desired to park would be directed accordingly. It was expected about ten to twenty percent of the aircraft would do so. Amazingly, nearly half of the arrivals are displaying such signs. The Flight Line Operations folks would like to know how the arriving pilots learned of the sign program, through the NOTAM, “Sport Aviation,” AVweb or elsewhere. If you see this, and you used a sign, let them know how you got the word.

Reserved parking was allowed for the first time this year. The first arrival could rope off and pay ($140) for additional spaces for friends who would be arriving later. For those who wish to camp together and cannot all arrive at the same time, it is a great deal, however, they do have to pay for days of camping prior to their arrival. For others who are already at OSH and see closer in parking spaces roped off with no one there, the idea may not be too popular. Feedback from users will determine whether the practice will continue.

Flight Line Operations constantly needs volunteers, so if you can do it and have a sense of adventure, stop by and sign up.