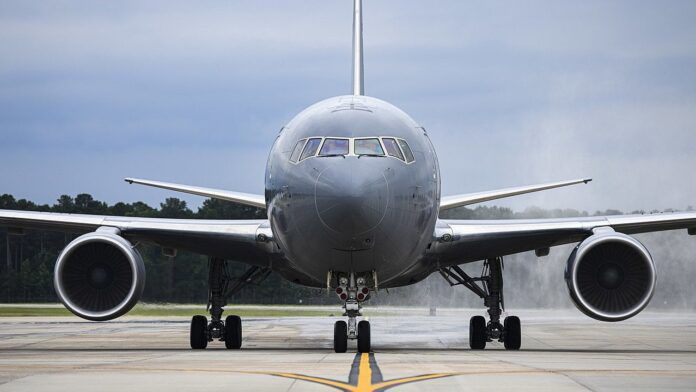 The Air Force has flown two single-pilot sorties with KC-46 Pegasus tankers. The Oct. 25 flights were the first to test an experimental set of procedures it says are planned for use in grim circumstances. Earlier this year, the Air Force floated the idea, saying it was afraid it would run short of tanker pilots in a war with China since the aircraft are both vulnerable and high value. The single-pilot gambit is being investigated in case there aren’t enough pilots to fly surviving aircraft. The sorties were flown from McConnell Air Force Base with a pilot, a single boom operator and an instructor acting as a safety observer.

“This mission was practiced extensively in flight simulators,” Air Force Col. Nate Vogel, head of the 22nd Air Refueling Wing, said in a statement. “Each phase of evaluation has been carefully considered, taking into account crew safety, aircraft capabilities, and existing federal aviation standards. That allowed us to make a deliberate and thorough analysis of what risks and hurdles are present, how to mitigate those, and allowed us to recommend training requirements to familiarize crews with the basic functions and critical controls of unfamiliar crew positions.”

On the first flight, the skeleton crew just did the flying part but on the second hop the pilot and boom operator went through “a full mission profile including ground operations; preflight tasks; takeoff; aerial refueling rendezvous; air refueling on-load and offload; landing; and debrief.” When the boom operator wasn’t dispensing JetA, he or she was sitting in the right seat. In addition to the safety observer, a second KC-46 with experienced crew members flew alongside in case the small crew had any questions or issues.