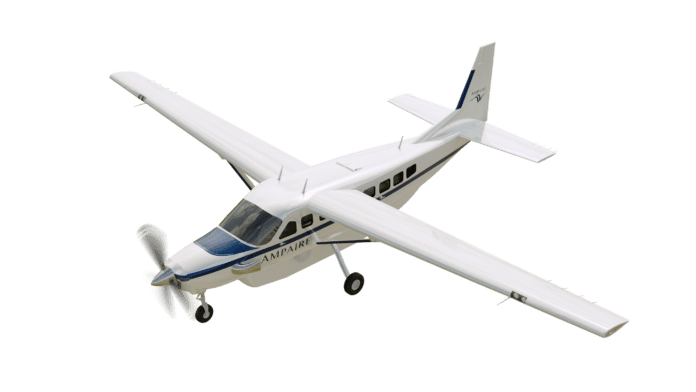 A southwest U.S. company has placed firm orders, backed by deposits, for five hybrid-powered Ampaire Eco Caravans for use on its California, Arizona and Nevada routes. Wing Tips also has an option for another 20 Caravans and 50 of the 19-seat Twin Otter conversions that will follow the Caravan into production. Wing Tips will use the Caravans on routes of 100 to 400 miles using small GA airports and a unique booking system that allows seat assignments for on-demand charter flights. Ampaire hasn’t flown the converted Caravan yet but plans to before the end of the year. The company claims the aircraft will use 50-70 percent less fuel depending on the length of the flight.

“Ampaire and WingTips share a vision of reducing the cost and increasing the convenience of regional air travel while addressing a major source of harmful greenhouse gas emissions,” said Ampaire CEO Kevin Noertker. “The starting point for moving toward zero emissions is with low-emission hybrid-electric aircraft such as the Eco Caravan.” The company says it expects supplemental type certification for the hybrid system by 2024 and Wing Tips is anxious to put the planes to work. “The Eco Caravan will redefine operating cost through its extreme efficiency,” said WingTips founder and CEO Mike Azzarello. “Our objective is to close the gap with the cost of driving while cutting travel time up to 75 percent. Working with Ampaire, we’ll be able to achieve this in a sustainable way.”