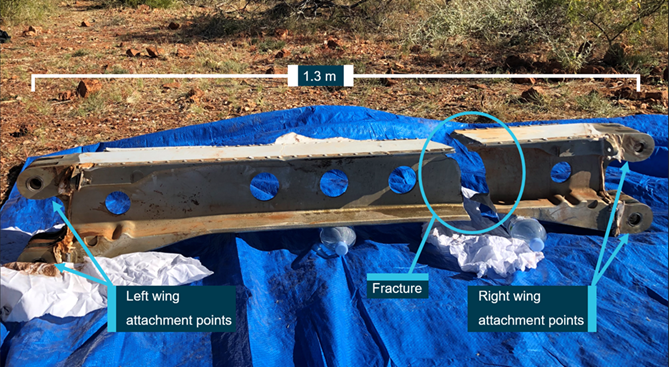 Australia’s Air Transportation Board says a fatal crash involving a Cessna P210 in 2019 likely would have been prevented if Cessna hadn’t relaxed inspection requirements for the wing spar carry-through structure on the aircraft eight years previously. The aircraft in question was being flown daily by a geophysical survey company when the beam broke, a wing separated and the pilot and passenger were killed. The plane was flown a lot and racked up an average of more than 1,000 hours a year in the previous six years and that was a factor in the crash according to the ATSB.

In 1992, Cessna began requiring regular eddy current and visual inspections of the spar based on hours flown, but in 2011 it determined that historical data justified changing the requirement to inspections every three years. “Had the previous flight-hour based eddy current inspection schedule remained in place, it is almost certain that the fatigue crack within the wing spar carry-through would have been detected before this accident occurred,” ATSB Chief Commissioner Angus Mitchell said. After the Australia crash, Textron, which owns Cessna, issued service bulletins requiring immediate inspections of the carry through structure and the FAA followed up with an AD, but the three-year schedule for subsequent inspections remained.

“The ATSB acknowledges the significant safety actions taken to date by the manufacturer and regulators as a result of this accident and the ATSB’s investigation, and notes that these measures have addressed the short-term risk of further similar failures,” said Mitchell. “Further, the ATSB welcomes Textron’s ongoing efforts to address the risk of cracking in wing spar carry-through structure of Cessna 210 aircraft used for low-level geophysical survey operations. However, the ATSB remains concerned by the indefinite nature of the manufacturer’s proposed analysis and certification program and recommends that further action be taken to address this safety issue.”