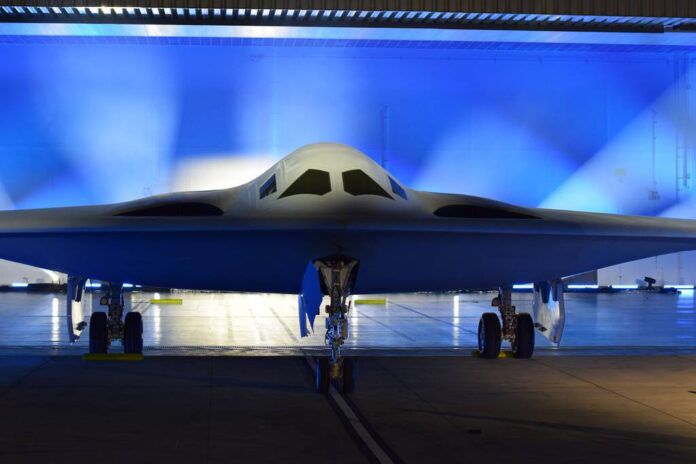 The world’s first “sixth generation” military aircraft was unveiled to friend and foe when Northrop Grumman and the Air Force rolled out the first B-21 Raider on Friday. The flying wing was also vaulted to the pointiest end of the stick at the ceremony, which took place at the company’s Palmdale, California, facility. “The B-21 Raider forms the backbone of the future for U.S. air power, leading a powerful family of systems that deliver a new era of capability and flexibility through advanced integration of data, sensors and weapons,” Northrop Grumman said in a news release. “Its sixth-generation capabilities include stealth, information advantage and open architecture.”

That open architecture means the airframe can evolve with new technology and weaponry as they become available and stay in touch with other assets in the process. “The B-21 is capable of networking across the battlespace to multiple systems, and into all domains,” the company said. “Supported by a digital ecosystem throughout its lifecycle, the B-21 can quickly evolve through rapid technology upgrades that provide new capabilities to outpace future threats.” Secretary of Defense Lloyd Austin was there and he emphasized its importance. “Now, strengthening and sustaining U.S. deterrence is at the heart of our National Defense Strategy,” he said.

The airplane unveiled Friday will begin flight testing next year at Edwards Air Force Base. There are six more in production and the Pentagon has promised to buy at least 100 of them. The plane is expected to enter service in two to three years. It looks a lot like a B-2 but there’s a lot more under the hood. “The real differences are inside of the platform, because you can think about how much digital technology has progressed since the time we built the B-2 and the time we built the B-21,” Northrop Grumman CEO Kathy Warden told Breaking Defense.