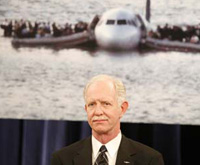 On Tuesday June 15, President Biden named Chesley “Sully” Sullenberger as his pick for the position of ambassador to the Council of the International Civil Aviation Organization (ICAO). Sullenburger, who gained fame for his 2009 “Miracle on the Hudson” water landing, was one of nine nominees Biden announced for ambassador positions. ICAO is a Montreal-based agency of the United Nations charged with promoting and developing international air transport.

Sullenberger was a vocal critic of President Trump and supported Biden’s campaign. Featured in an ad paid for by the anti-Trump Lincoln Project, he said, “From my service as an Air Force officer and a fighter pilot, I knew that serving a cause greater than oneself is the highest calling. And it’s in that highest calling of leadership that Donald Trump has failed us so miserably.”

Like President Biden, Sullenberger also struggled with stuttering as a child, and wrote an op-ed piece in The New York Times in January 2020 about his challenges.

Sullenberger retired from US Airways in 2010, the year after he and second officer Jeffrey Skiles skillfully landed their Airbus in the frigid January waters of the Hudson River abeam Manhattan. All 155 on board were rescued before the airliner sank. The A320 lost power in both engines after flying through a flock of geese shortly after takeoff from New York’s LaGuardia Airport on a flight to Charlotte, North Carolina. Deciding the Airbus did not have enough altitude to glide to LaGuardia or make it to nearby Teterboro Airport in New Jersey, Sullenberger advised controllers, “We’re gonna be in the Hudson.”