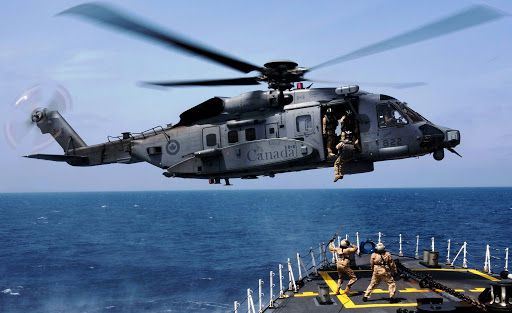 The Canadian military is reportedly asking Sikorsky Aircraft to revise the flight director software in its CH-148 Cyclone, a military version of the S-92, after a crash off Greece last year. It’s the same platform being developed as the next generation Marine One for presidential and VIP service. The Canadian Press is reporting that the pilot of the Cyclone, who was taking part in a military exercise last April 29, performed an aggressive but common maneuver known as a “return to target” when the flight director overrode his control inputs and dove the big helicopter into the Ionian Sea. A total of six military crew members died. A military source told Canadian Press that the military wants the code for the flight director substantially rewritten to take out “command accumulation bias,” the code that is cited in the report. “We need to look at that software and see if we can eliminate this from the software altogether, being careful to understand when you make any changes like that you may introduce a butterfly effect and cause problems elsewhere,” the source said.

The crew was operating off a Royal Canadian Navy warship in a NATO exercise and was heading to the ship to practice picking up personnel off the deck. The pilot, in line with his training, kicked the helicopter into the maneuver, which is the rotary wing equivalent of a half Cuban 8. He did not disconnect the flight director, but he had also never been warned that the flight director only allowed its programmed flight profile to be “momentarily” overridden by manual control and that longer deviations had not been tested. As the pilot rolled to level after about 20 seconds, the flight director took over and dove the aircraft into the ocean, possibly trying to recover the airspeed lost in the maneuver. According to the news report, “the pilots’ training didn’t cover ‘with sufficient detail’ certain risks of flying the aircraft, leaving the flyers unaware the autopilot would seek to keep control of the helicopter.”