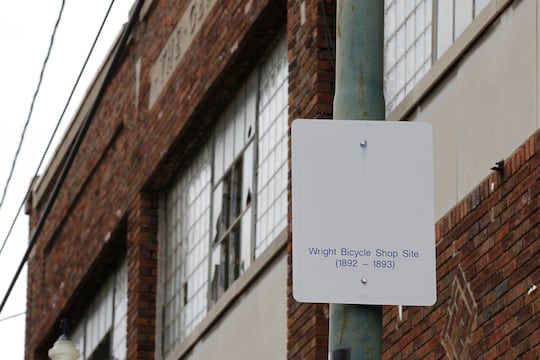 A deteriorating building that once housed the Wright brothers’ first bicycle shop has been approved for demolition in Dayton, Ohio, but the impact on aviation history appears minimal. The bike shop occupied the 129-year-old brick building for a year from 1892 to 1893 but the building was taken over by the Gem City Ice Cream Co., which occupied it until 1975. The Wrights are not thought to have started tinkering with powered flight until several years after they moved out of the doomed building, which city officials say has serious structural issues and is in danger of falling down.

The Wrights actually moved their shop several times in the 14 years their bicycle business was in operation. Most of the early work on aircraft occurred in the fourth and final location in Dayton, which they occupied from 1897 to 1908. The Wrights built about 300 bicycles, and they ranged in price from $42.50 to $65, equivalent to $1300 to $2000 in today’s dollars. The stopped making bikes in 1908 to concentrate on airplanes, which they developed into useful machines on Huffman Prairie on the outskirts of Dayton.

Despite the poor condition of the first building, community boards initially rejected the demolition bid, instead ordering the city to explore selling it to someone who would redevelop it with the original facade. Heritage groups protested the demolition, noting that retaining some of the old building would make it eligible for senior government grants. When there were no takers for the existing building, the city’s Board of Zoning Appeals finally approved the demolition request last week.