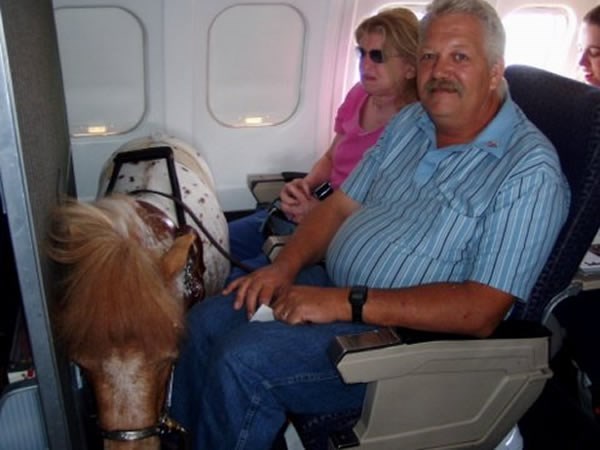 The Department of Transportation has cleared the air somewhat on how airlines may decide which animals can travel in the cabin with their owners, and flight crews are breathing easier. Last week the DOT essentially rid the already-cramped aluminum tubes of “emotional support” animals, which have heretofore been limited only by the imaginations and temerity of their owners. From ponies to peacocks, flight crews have seen them all, and from now on the definition of “service animal” will specify “dogs that are trained to do work or perform tasks for the benefit of an individual with a disability.” What that means is that dogs that have the credentials can lie at their owners’ feet while everything else is a “pet” that has to fit in a crate under the seat or travel in the hold. Airlines have the final say on what “pets” they’ll allow.

The Association of Professional Flight Attendants Association sighed in relief. “In recent years, our members have experienced firsthand the surge of untrained and sometimes even wild animals brought onboard under false certifications,” the union said in a news release. “Far too often, flight attendants have been intimidated, bitten, and required medical attention. We are frequently left to deal with behavioral issues, including urination, defecation, barking, and animals becoming loose in the cabin.”

For some humans, however, the rule change doesn’t go quite far enough. Regardless of how well behaved their canine cohorts in the cabin are, those with severe asthma and allergies can be imperiled by their proximity. The Asthma and Allergy Foundation of America lobbied DOT to take this opportunity to compel airlines to take its members’ plight into consideration. “We would still like to see a rule change to accommodate passengers with allergies or asthma who need distance from animals,” said AAFA President Kenneth Menendez. “For some people with asthma and allergies, traveling in a confined space with animals could trigger a life-threatening attack,” said Jenna Riemenschneider, the group’s director of advocacy.