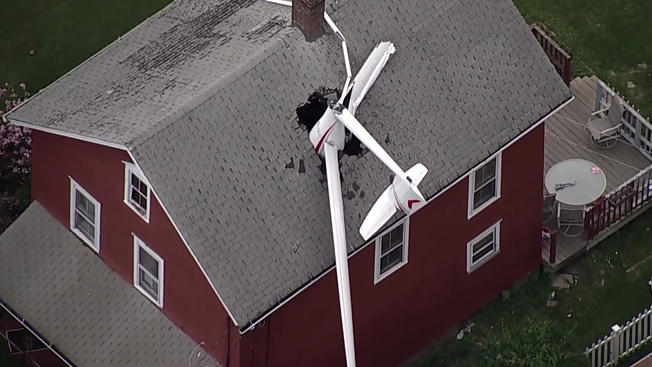 The pilot of a high-performance electric motor glider escaped serious injury Tuesday after the aircraft plunged through the roof of a house near the Danbury, Connecticut, airport. There were no injuries on the ground.

Local news outlets posted dramatic photos of the glider—an Italian-made Alisport Silent 2 Electro—with its tail section protruding from the roof of the house. The motor glider had just taken off from nearby Danbury airport when the pilot reported loss of power. The aircraft’s tail boom broke both aft of the cabin structure and at the empennage, according to photos. One wing also detached.

Witnesses told NBC CT news that the pilot emerged from the wreckage inside the house. “Three of us went upstairs and walked into the attic. (The pilot) was up there. We told him to come down and he said not until he finds his glasses,” Manny Furtado, a local resident who called 911 to report the crash, said. Three residents of the house were taken to the hospital for examination.

The Alisport Silent 2 Electro is capable of self-launch with a 22 kw (29.5 HP) brushless electric motor powered by a lithium-ion battery pack. After launch, the motor—which swings a nose-mounted foldable propeller—can sustain the aircraft for about 40 minutes, according to Alisport. The FAA registry lists 27 of the aircraft in the U.S., 16 of which appear to be the electric version.