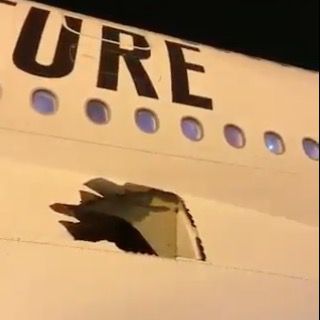 An Emirates A380 landed safely in Brisbane, Australia, on Saturday after apparently making some or even most of the 13-hour flight from Dubai with a big ragged hole in its wing root fairing. There are various scenarios being described in media and social media, but all that has been confirmed is that the incident occurred in the air and the crew elected to continue the flight. The plane landed in Brisbane and ground crews shot cellphone video of a damaged main gear tire and the hole in the composite fairing where it would have been when retracted.

The incident has, of course, ignited debate on the pilot decision-making, fueled by some reports that the anomaly occurred as the gear was retracted. There have been passenger reports that the “loud bang” they heard happened much later in the flight. The A380’s sensor suite was apparently doing its job, however, because the crew told controllers in Brisbane they suspected they’d be landing with a blown tire and asked for equipment to be standing by.