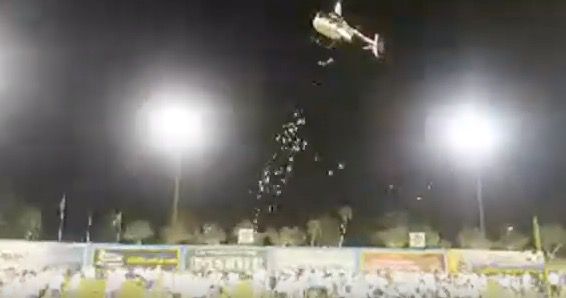 The FAA has launched an investigation into whether a Las Vegas helicopter charter company violated safety regulations by dropping $10,000 in cash on a soccer field during halftime promotion for the local pro team. The Skyline Helicopter Tours aircraft circled the field in the packed stadium a half-dozen times before dropping the cash over 200 fans picked to chase after the swirling currency. It was at least the second time the Las Vegas Lights soccer team had staged the promotion but this time someone sent a video to the FAA.

There is no FAA rule about dropping stuff from aircraft except that it can’t cause injury to anyone on the ground. Since paper money isn’t dangerous from that point of view, the FAA is basing its investigation on a rule that says a pilot can’t fly below “an altitude allowing, if a power unit fails, an emergency landing without undue hazard to persons or property on the surface.” The company hasn’t commented but the owner of the soccer team insists the promotion was safe. “We believe they (Skyline) took all safety precautions necessary,” said owner Brett Lashbrook. “We are surprised by the FAA’s incredibly subjective rule that they seem to be citing.”