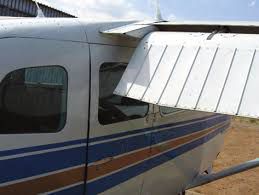 The FAA is asking for input from pilots and operators of Cessna 206s as it mulls following Canada’s lead in issuing an airworthiness directive that would, among other things, limit seating to five instead of the normal six. Transport Canada has proposed an AD that would require all 206s on its registry to have an upgraded rear cargo door handle installed and placarded. It would also mandate the removal of one of the middle row seats to improve emergency egress from the plane, particularly in floatplane accidents.

The design issue at the root of the action has long been recognized. If the flaps are deployed 20 degrees or more, the double back doors won’t open fully. In an accident with the flaps down, rear row passengers have to clamber to the front row doors to get out. Canada’s Transportation Safety Board recently released a report on the capsizing of a 206 on floats in 2018 in which all the occupants survived the crash but three drowned. Only the pilot and the passenger in the front seats were able to get out. The TSB recommended Transport Canada issue an AD to make emergency egress of the aircraft better.

The issue has been discussed many times since it was first flagged in 1960s but agencies have previously determined there is no practical way to fix the conflict between the door and the flap. A redesigned door handle that allows the rear door to be forced open became available in the early 1990s and was used in aircraft built since 1998 but the majority of 206s were built before the new handle was designed. Canada is considering making installation of that $3,500 door mechanism mandatory along with removal of one of the middle row seats to clear the way to the front left door.  The AD also requires that rear row passengers be briefed to use the front left door in an emergency and to only use the back doors if the front doors won’t open. Transport Canada is inviting comments on the proposed AD until March 18. The FAA is accepting input from U.S. operators as it investigates whether to follow the Canadian lead.