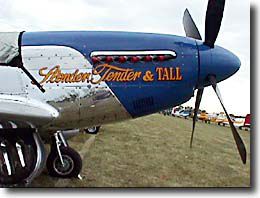 One of the many exciting parts of EAA AirVenture Oshkoshis the opportunity to get a ride in a special aircraft. I had the good fortune to catch aride in the jump seat of Dick Thurman’s P-51 Mustang, "Tender, Slender, andTall." Dick offered the ride while he flew both individually and as a flight of threefor a photo shoot over Lake Winnebago.

Even sitting in the back seat of this spectacular aircraft, you know something is upwhen just spinning the starter shakes the whole aircraft. Once the powerful Rolls Royceengine fires up, the ear splitting rumble is superb. The taxi out is always fun because everyoneon the flight line is watch you taxi by! Not only is the P-51 an amazing aircraftin general, Thurman’s 51 is a highly polished award winner which dazzles the eye justmotionless on the flight line. Just during the preflight, three people asked Dick what heused to polish the aircraft! 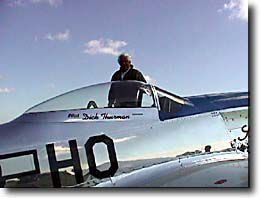 The only surprise prior to take off was when Dick rolled the canopy forward andalmost took off my head with the spreader bar. I solved that problem by removing the pinsand dropping the bar. The formation takeoff went a lot smoother and we had no problemcatching up to the Baron photo aircraft.

We flew formation with the Baron solo and as a echelon for photos from the side, inbanks, and also from the top by using the belly window on the Baron which was aptlylabeled, "how’s my flying, call 1-800…!" The air was remarkably smooth, exceptfor the rare crossing of a prop wash while changing positions, and the day was glorious.

A ride in a P-51 must be something like pilot heaven and the hour ride seemed like onlyfive minutes when we broke right over runway 27 at Wittman Field on our return to earth.Flying home in the 340 just is not going to feel the same!