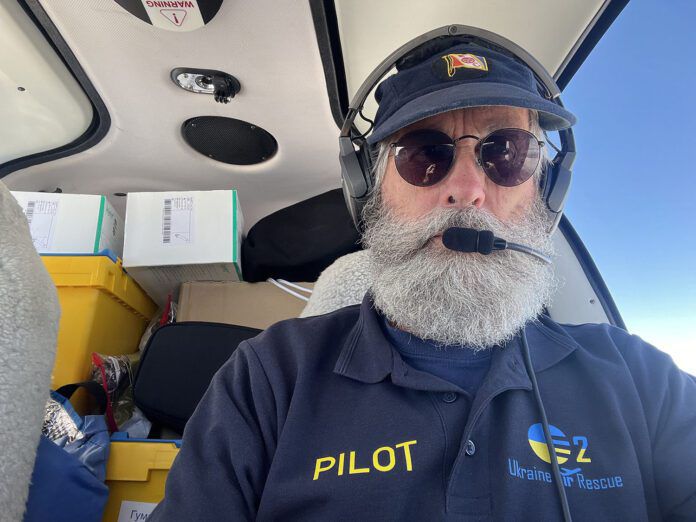 A volunteer air force of more than 300 owner-pilots is delivering medical and other supplies to Polish border towns and returning with wounded refugees from war-torn Ukraine. Ukraine Air Rescue was formed just after Russia’s invasion of Ukraine in late February and has flown thousands of flights in everything from light singles to Pilatus PC-12s. Florida Cirrus SR22 owner John Bone heard about the effort and flew over the North Atlantic route to become the first American pilot involved. “Once in Germany, I found a well-organized, well-funded, and friendly group of general aviation pilots,” Bone wrote in an essay in Air Facts.

He wrote that a typical mission covers almost 1200 miles round-trip and takes up to 12 hours in total. “At the end of the 10- to 12-hour day, you are drained,” he said. Several nongovernmental organizations (NGOs) have come to depend on the UAR to deliver time-sensitive critical cargo for distribution from Poland, he wrote. On the return trip he’s carried soldiers and civilian refugees, all in need of medical attention. He said he’s made many friends and heard some hair-curling stories of atrocities carried out by the Russians. He said pilots get no compensation for their time or wear and tear on their airplanes and sometimes pay for their own fuel.

He wrote that the effort is remarkably effective. “In the first six months of operation, the group had flown 65 flights, carried 52 passengers needing medical care, hauled over 37,000 lbs. of medical supplies, and delivered over 150 medic backpacks,” Bone wrote. He said it’s thought UAR is the largest volunteer effort by GA pilots ever undertaken and that UAR is likely to remain operating for the duration of the war and when Ukraine airspace opens. “When it does open, there is no doubt that Ukraine Air Rescue will be some of the first planes to deliver aid into Ukraine,” he wrote.