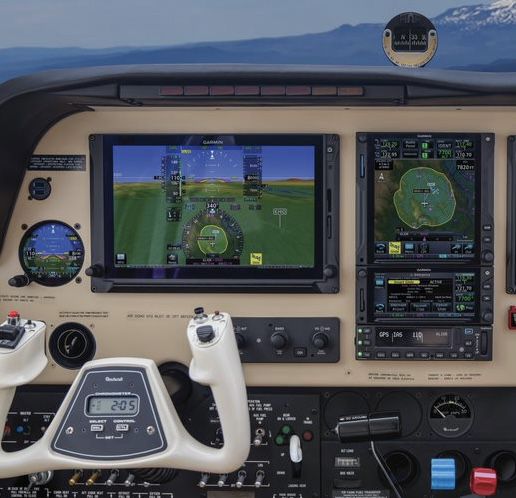 Ahead of AirVenture 2021, Garmin released Smart Glide—the latest feature that’s part of the company’s Autonomi family of autonomous technologies, which also includes emergency Autoland. Smart Glide, which recommends a suitable airport that’s estimated to be within gliding range, also navigates to the terminal area so the pilot can execute the dead-stick landing. Moreover, when interfaced with a Garmin autopilot, Smart Glide automatically engages the autopilot and pitches for the aircraft’s best-glide airspeed.

Smart Glide requires at least one of Garmin’s latest GTN Xi-series navigators, plus a compatible Garmin display. These include the G5, GI 275, G500/600 TXi and the G3X Touch. Smart Glide is activated with an optional panel-mounted switch, or by pressing the navigator’s Direct-To button for two seconds. Once activated, it recommends an airport that’s estimated to be within gliding range and creates a direct-to route to the field.

The automation considers a number of factors when suggesting a landing destination, including terrain, winds, runway length and even weather sourced from a connected ADS-B and SXM system. It switches the flight display’s CDI to GPS mode and when connected to a Garmin transponder, provides a shortcut for the pilot to tune the 7700 emergency code and places the airport’s comm frequency in the standby tuning window. The pilot can also select alternate airports as recommended by Smart Glide, based on VFR or IFR conditions. During activation, the Glide Range Ring on the navigator’s Map page shows airports within range and dynamically adjusts it based on winds and terrain. Within 4 NM of the airport, the system advises the pilot (via aural and visual cues) that they are approaching the runway environment, while also offering AGL altitude information, distance and bearing to the runway.

Smart Glide will be available as a no-charge (installation is extra), dealer-installed software upgrade for compatible systems starting in August 2021. There will also be a $129 panel-mounted activation switch.