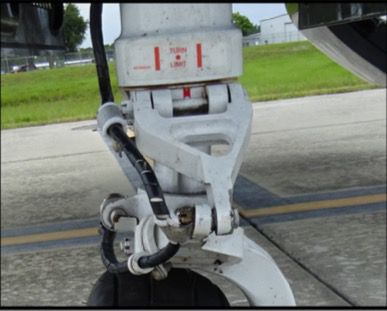 An NTSB final report (search ERA20LA237 here ) appears to shed at least some light on the cause of a series of puzzling runway excursions by high-performance Piper singles in the last couple of years. It appears improper ground handling led to the excursion by a PA46 at Titusville Airport in Florida on July 3, 2020. The nosegear turned 90 degrees from the centerline on touchdown and the pilot was unable to keep it from skidding off the runway. It was substantially damaged but he wasn’t hurt. The NTSB determined “the airplane was towed beyond the left turn limits at some point before the accident flight, which fractured one or two of the steering horn attachment bolts.”  The NTSB is investigating at least five other PA46 excursions with similar circumstances but this report doesn’t mention any correlation.

The operator of the aircraft told investigators he was aware of the towing limits on his airplane and he had never seen it improperly towed, but he also said he didn’t know how many times it may have been towed without his knowledge. The nosegear is attached to the steering horn with a vertical shaft and three bolts on a flange. There are lines painted on the gear showing the safe turn limits when using a tow bar, which can act as a lever to deliver enough torque to shear the attachment bolts if the turn is too sharp. The NTSB deduced at least one of those bolts had to be attached after takeoff on the accident flight because the gear won’t stow unless the wheel is turned 90 degrees during retraction and one or more failed on landing.