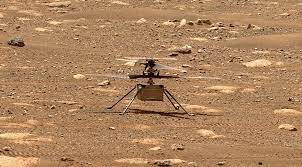 As expected, Ingenuity, the diminutive helicopter the Perseverance rover flew to Mars, completed a successful test flight from the Jezero Crater at 12:31 a.m. EDT and achieved an altitude of about 10 feet before touching down successfully 40 seconds later. Data confirming the flight was received by NASA at 6:15 a.m.

“Ingenuity has performed its first flight, the first flight of a powered aircraft on another planet!” Ingenuity’s chief pilot Håvard Grip announced, confirming that telemetry at NASA’s Jet Propulsion Laboratory in Pasadena, California, showed a nominal flight. If subsequent data confirms performance goals, future probes to Mars might routinely include helicopters to extend survey capability. Ingenuity is a one-of-kind aircraft weighing 4 pounds and with contra-rotating carbon-fiber blades. It was an $85 million add-on to the $2.7 billion total cost of the Perseverance program. The rover landed on the red plant on Feb. 18 after launching from Earth on July 20, 2020, from Florida’s Space Coast on an Atlas V booster.

Although Ingenuity carries no survey instruments, its flights are intended to prove the concept of rotary flight in Mars’ thin atmosphere, which has a density altitude of about 100,000 feet. Additional flights are planned.