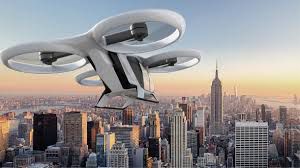 In just two decades, there could be some 430,000 air taxis operating worldwide, according to industry analyst Frost & Sullivan. The company further predicts the push for so-called urban air mobility will emerge not from the U.S. or Europe, but from the Middle East, commencing in just two years.

“The United Arab Emirates, New Zealand, and Singapore are expected to be the first adopters of air taxis, while Brazil and Mexico … [will be] leveraging their helicopter taxi expertise,” said Joe Praveen Vijayakumar, Frost & Sullivan’s mobility analyst. He said nearly 50 cities are studying the feasibility of UAM, initially for cargo operations but later for passenger flights over congested cityscapes.

“Globally, almost 50 cities are considering the feasibility of UAM, and most of the applications are focused on cargo drones, which will eventually open up the market for passenger UAM vehicles,” Vijayakumar added. Frost sees the influx of established aerospace companies such as Boeing and Airbus combined with technological advances driving the UAM market. The data, if it pans out, is staggering. The company sees an annual UAM growth rate of 45.9 percent and a worldwide fleet of 430,000 air taxis of various types by 2040.