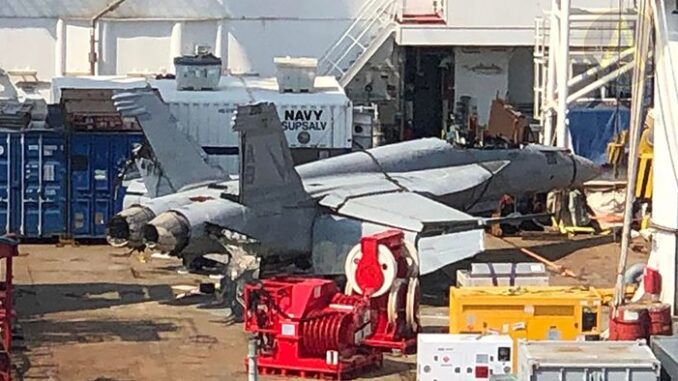 The Navy has fished the F/A-18 that went overboard from the USS Harry S. Truman last month out of the Mediterranean. The fighter was blown off the deck in unexpectedly bad weather on July 8. The plane was back on a Navy ship Aug. 3. “The rapid response of the combined team … allowed us to conduct safe recovery operations within 27 days of the incident,” Lieutenant Commander Miguel Lewis, U.S. Sixth Fleet salvage officer, said in a statement. “Our task tailored team operated safely and efficiently to meet the timeline.”

According to the Aviationist, the plane was an E model so had lots of sophisticated gear onboard that the Navy was anxious to keep prying eyes from seeing. One of their readers supplied the photo above. The aircraft was located on the bottom at a depth of 9500 feet by the Navy’s Salvage and Diving command by an underwater drone which attached lines. The construction vessel Everest hauled it to the surface and it was sent back to the U.S. “The search and recovery took less than 24 hours, a true testament to the team’s dedication and capability,” the Navy said in the news release.