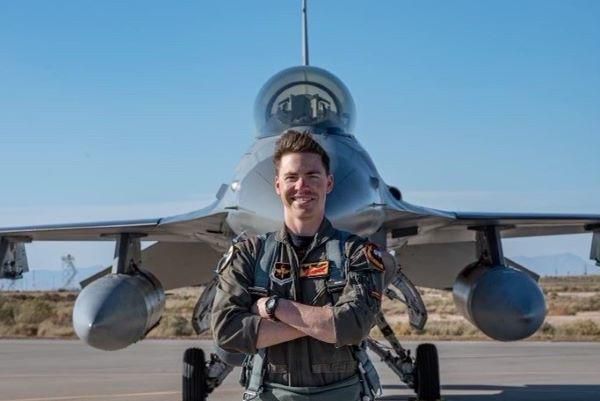 The death of a new Air Force F-16 pilot in a 2020 landing accident at Shaw Air Force Base has prompted major changes in operational flight training. Lt. David Schmitz died when his ejection seat malfunctioned as his Viper slid along the runway on partially collapsed landing gear after he hit the localizer antenna while landing last June 30. It was the culmination of a night training flight for which he was utterly unprepared, according to the final investigation report. “We have worked with leadership at all levels to apply the lessons from this tragic accident beyond just the F-16 community and to all applicable weapons systems in order to minimize risk to our aircrew,” Maj. Gen. Mark Slocum, Air Combat Command director of air and space operations, said in a statement, according to military.com. Schmitz was about two-thirds of his way to becoming a fully operational combat pilot at the time of the accident.

The mission that night was to refuel from a tanker and do a simulated attack on enemy air defenses. He was supposed to have learned aerial refueling—in daylight—during his basic F-16 training but COVID-19 measures meant there were major gaps in his training. The night mission was his first attempt at the complex operation and investigators cited the lack of training in their report. Immediately after the crash, the commander of Schmitz’s unit, the 20th Fighter Wing, took it upon himself to ensure all pilots were up to speed with skills like aerial refueling. “[While] those introductory skill sets are often taught at a training base, not a combat-coded F-16 unit … we spent some of our own wing funds to have them come up and park tankers up on our ramp here at Shaw and then fly with us multiple times per day with multiple jets,” Col. Lawrence Sullivan told the publication. “Which is a little bit of an anomaly.” The Air Force has ramped up aerial refueling training since the accident.