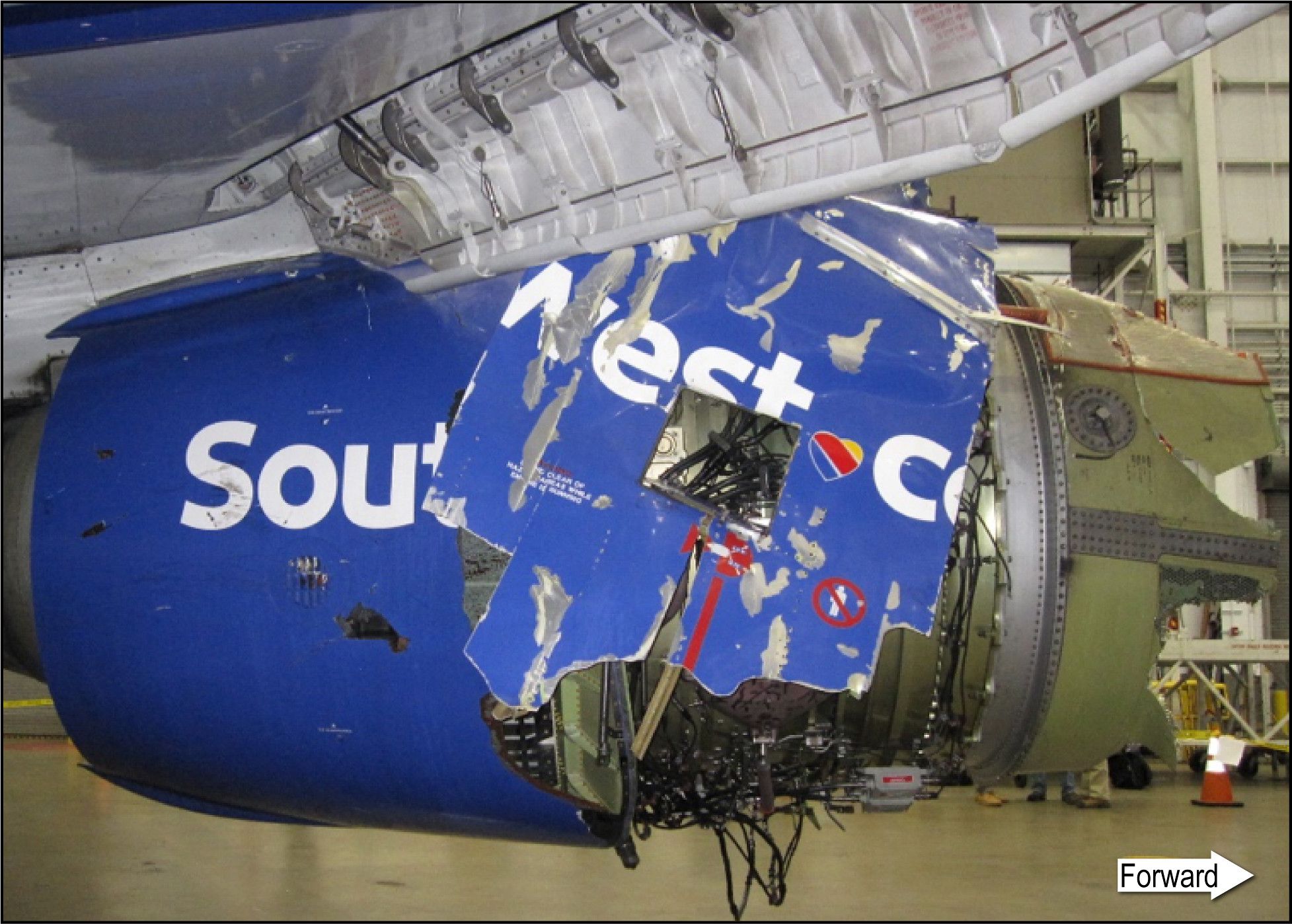 Reinforced fan cowls for Boeing 737 Next Generation airliners are among the NTSB’s recommendations after analyzing the April 2018 incident with a Southwest Airlines flight that resulted in one passenger fatality. The left engine on this 737-700 failed 30 minutes after the flight left New York’s LaGuardia Airport, with fragments from the first-stage fan tearing parts of the cowling off the wing and impacting the fuselage, where it caused a window to depart the airframe. The passenger at that window seat succumbed to her injuries.

In a preamble to seven specific recommendations, the NTSB says that the “left engine failure occurred when one of the fan blades fractured at its root (referred to as a fan-blade-out [FBO] event). The fan blade fractured due to a low-cycle fatigue crack that initiated in the dovetail (part of the blade root), which remained within a slot of the fan disk.” It notes that when the engine was last overhauled in 2012, it was done according to acceptable standards and practices at the time and it was unlikely the crack would have been found through testing. After another blade failure in 2016, engine manufacturer CFM International came up with an on-wing inspection intended to find cracks, and this test is now conducted with periodic blade “relubrication” on the CFM56.

“This accident demonstrates that a fan blade can fail and release differently than that observed during engine certification testing and accounted for in airframe structural analyses,” said NTSB Chairman Robert Sumwalt in a press release accompanying the report. “It is important to go beyond routine examination of fan blades; the structural integrity of the engine nacelle components for various airframe and engine combinations needs to be ensured.”

The NTSB’s narrative paints a vivid picture of the aftermath. “Portions of the left engine inlet and fan cowl separated from the airplane, and fragments from the inlet and fan cowl struck the left wing, the left-side fuselage, and the left horizontal stabilizer. One fan cowl fragment impacted the left-side fuselage near a cabin window, and the window departed the airplane, which resulted in a rapid depressurization.” Kudos to the flight crew, which declared an emergency and landed in Philadelphia only 17 minutes after the engine failure.

Of the seven recommendations set out by the NTSB, three of them involve Boeing determining the most critical failure location on the fan cowl and reinforcing it to withstand the impact, then fitting them to new-production NGs, and then ensuring that the fleet is retrofitted to the new standard. The NTSB also suggests that the FAA should expand “Part 25 and 33 certification requirements to mandate that airplane and engine manufacturers work collaboratively to (1) analyze all critical fan blade impact locations for all engine operating conditions, the resulting fan blade fragmentation, and the effects of the fan-blade-out-generated loads on the nacelle structure and (2) develop a method to ensure that the analysis findings are fully accounted for in the design of the nacelle structure and its components.”

The NTSB notes that this was a full flight and so to make room for individuals trying to resuscitate the stricken woman—who had been pulled partially out of the fractured window—the passengers in the adjoining seats had to go somewhere. Which leads to this recommendation from the NTSB: “Develop and issue guidance on ways that air carriers can mitigate hazards to passengers affected by an in-flight loss of seating capacity.” Noting that there was no specific guidance outlined in any of the FAA’s regulations or advisory circulars, the NTSB nevertheless said that “such guidance would help air carriers implement procedures to mitigate hazards to passengers resulting from an in-flight loss of seating capacity.”