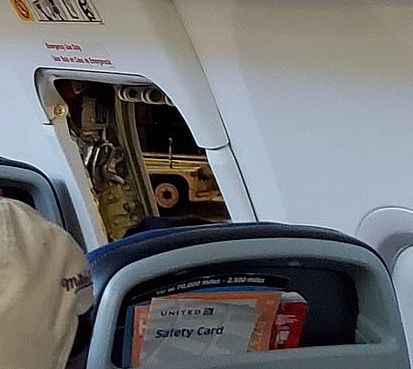 Watch for new warning stickers on the emergency exits of airliners after a California man on a United flight opened an over-wing window, walked out on the wing and then jumped to the ramp as the plane taxied at O’Hare early Thursday. Randy Frank Davila, 57, was arrested but won’t face charges for the federal crimes he allegedly committed because Chicago police contend he didn’t get fair warning. The CPD issued a statement saying Davila has been charged with misdemeanor reckless conduct rather than a felony because there was “no signage on the emergency door nor the tarmac advising the subject that exiting a moving plane would constitute criminal trespass to restricted areas.” He was released on a $3,000 bond and is supposed to be back in court in June.

The weirdness ensued after the flight touched down about 4:30 a.m. on a red-eye from San Diego. Davila had reportedly been behaving strangely on the flight and had been refused alcohol service. When the plane was nearing the gate, he allegedly popped the window, slid off the wing and walked to the front of the stopped aircraft and started waving it to the gate. The plane made it to the gate about 20 minutes later after Davila had been escorted to safety.