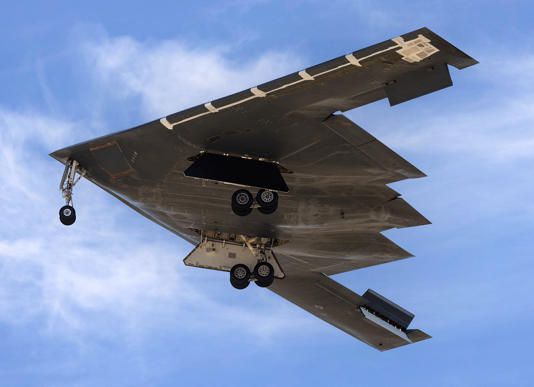 A B-2 bomber damaged in a runway excursion about a year ago at Whiteman Air Force Base in Missouri was ferried to Palmdale, California, where it was built, showing the scars of its gear collapse. Photographer Tom Jordan caught the plane landing showing the obviously temporary repair. The half-billion-dollar aircraft was stitched up with speed tape and sported a big patch near its nosegear to make it flyable to Plant 42, the Air Force’s top-secret manufacturing facility, for proper repairs according to MSN. The wrinkled composite with its toxic radar-reflective coating is expected to cost about $10 million to repair.

The flying wing, named Spirit of Georgia, is one of just 20 Spirits that form the pointiest tip of the U.S.’s airborne nuclear arsenal, and was making an emergency landing at Whiteman, the B-2 fleet’s home base, after a hydraulic issue that occurred when the crew deployed the landing gear. When the aircraft touched down, worn-out springs in the left main gear failed to keep it locked and the plane veered onto the grass. It was the plane’s third training sortie of the day and the two pilots were not hurt.