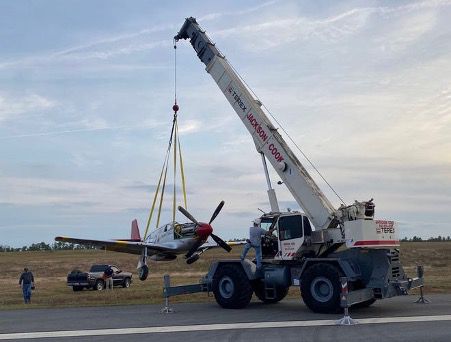 The Commemorative Air Force’s P-51C Mustang experienced a runway excursion last Thursday (Nov. 4) on landing at Tallahassee International Airport in Florida. The pilot was not injured, and the damage is described as minor. The airport’s Deputy Director of Aviation, Jim Durwin, told news outlets, “It basically went off the runway and came to rest on the side of the runway. It’s in one piece.”

The early-model razorback Mustang is painted to represent one of the Tuskegee Airmen’s “Red Tails” from World War II, the first all-African American outfit to fly fighters in combat. Doug Rozendaal, who regularly flies the aircraft but was not flying it at the time, told AVweb it was a currency flight for the pilot. He said the incident resulted in damage to the left main landing gear, the left wing and the propeller. “It should be back flying by late March or early April,” he said.

The Mustang is part of the “Rise Above Traveling Exhibit,” a multimedia presentation that provides the opportunity to learn the history of the Tuskegee Airmen, so named for the Alabama Army Air Forces base where they trained. Albeit without its star attraction, the exhibit went on in Tallahassee as planned after the Mustang was removed from where it came to rest alongside the runway.