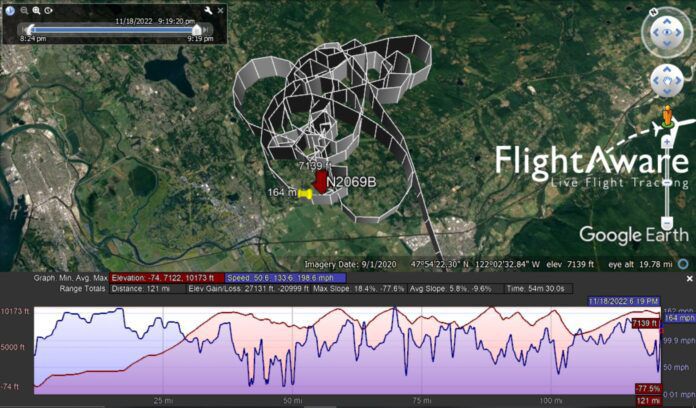 Two pilots and two flight test engineers were killed in the crash of a Cessna 208B Grand Caravan that was undergoing flight testing when the wings came off in Washington State on Friday. The plane, owned by Copper Mountain Aviation in Alaska, crashed near Everett, Washington, Friday morning after spending about a half-hour doing a variety of maneuvers to establish baseline performance data before it was to be modified. According to the Seattle Times, the aircraft was crewed by personnel from Seattle mod shop Raisbeck Engineering and had not yet been altered.

Raisbeck Chairman Hal Chrisman told the Times his staff was accumulating data on the aircraft’s performance in its original form for comparison later when the modifications were finished. “I think the most important thing is we were flying an aircraft in which we had not installed our modification yet,” he said in an email statement to the Times. He did not elaborate on the mods planned for the aircraft but Raisbeck offers a drag reduction system for Caravans that makes them more fuel efficient. The plane left Renton Municipal Airport at 9:24 a.m. and went direct to the Everett area, about 50 miles north. There it began a series of heading, altitude and speed changes while flying at 10,000 feet and below accoding to FlightAware and Flightradar24 .