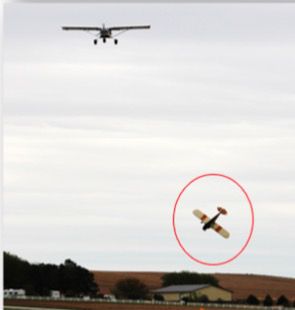 FAA inspectors took part in a safety briefing that preceded an impromptu STOL landing and takeoff competition that turned fatal in late May. In its preliminary report into the apparent stall-spin accident that killed competitor Tom Dafoe, the NTSB also says the pilot was reportedly warned twice to “lower your nose” on the third round of the unofficial competition held as an optional event within the MayDay STOL Drag meet at Wayne Municipal Airport in Nebraska on May 20. The full report is copied at the end of this story.

An unspecified number of FAA inspectors, along with organizers of the event, met with pilots who had suggested they compete in the traditional competition after the STOL Drag competition was postponed due to high winds exceeding minimums for the tailwind landings that are part of drag competitions. The 15-knot northeast wind was, however, good for a landing and takeoff competition on the grass Runway 31. According to the prelim, after two uneventful landings and takeoffs, Dafoe was on final for his third attempt and was warned over the radio by a STOL Drag rep who coordinated the pattern operations to “Lower your nose. You look slow” 45 seconds before the crash and to “Lower your nose” 15 seconds before the accident.

Like all the other competitors, Dafoe had taken part in training and evaluation before the event and had been “signed off” by organizers to take part, the report said. The accident happened on the second day of the four-day event and the remainder of the competition was canceled.