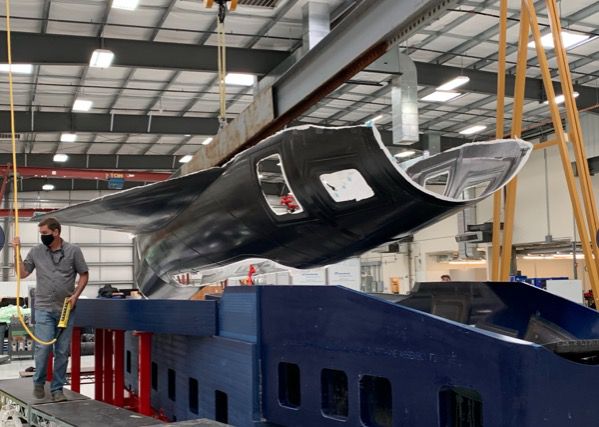 Stratolaunch has started construction on its hypersonic testbed aircraft, the Talon-A, as it looks toward test flights as early as 2022. The company recently tweeted pictures of the Mach 6 aircraft’s first fuselage layups. It’s expected the first flights will be part of a military test program as the competition between superpowers for hypersonic weapons heats up. Stratolaunch, which was founded by billionaire Paul Allen in 2011, was sold after his 2018 death and the new owners refocused efforts on hypersonic research. In October they announced a partnership with aerospace development company Calspan to build the first Talon-A.

Allen was originally planning to use the massive twin fuselage carrier aircraft designed by Burt Rutan as a launch platform for low-orbit rocket launches but he died before realizing that business plan. After a single test flight of the aircraft in Mojave in 2019, the company was put up for sale and new owners repurposed the plane, nicknamed Roc, for hypersonic aircraft testing. Roc has been rolled out of the hangar recently and is reportedly being readied for more test flights early in the New Year.