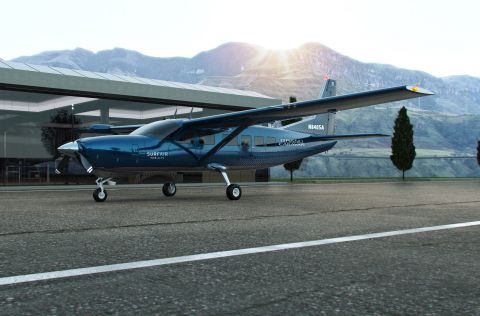 Surf Air Mobility has announced it intends to “develop and certify hybrid and fully-electric powertrains for new and existing Cessna Grand Caravan aircraft.” The California company has struck deals with electric motor maker magniX and AeroTEC, an engineering company, to develop STCs for both types of powertrains. It has also announced a deal to merge with Southern Airways, which operates a large fleet of Caravans, to put the electrified aircraft to work. “AeroTEC and magniX are perfect partners for SAM to accelerate electrification of Cessna Grand Caravans and to lead the new era of green flying,” said Sudhin Shahani, co-founder and CEO of Surf Air Mobility.

The company will first concentrate on the hybrid Caravans because they won’t need any chargers at the airports they serve. Even though the planes will still need fossil fuel to fly, Surf Air is predicting big savings for the environment and for its bottom line. “SAM’s first-generation hybrid electric Cessna Grand Caravans are being designed to target carbon emissions reductions of up to 50 percent and direct operating cost reductions of up to 25 percent,” the company said. The aircraft will have the same range as PT-6-powered Caravans so will be interchangeable on existing routes.