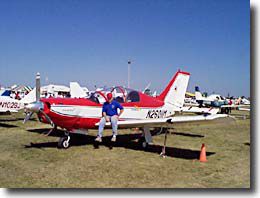 The M-26 Airwolf is built by PZL Mielec in Poland andjoins a short list of FAA Certified airplanes in the Aerobatic and Standard categories.Mielec built MIGs as a government entity during the Cold War and is now functioning as aprivate company in the newly capitalistic regime. The aircraft is constructed of 51%American made parts which are shipped to Poland where they are assembled. After assembly,they are test flown and the wings removed for shipment. The airframe is polish built. Theyare delivered to Melex USA in Goldsboro, NC where they are painted. This allows thecustomer to specify the color scheme and paint design.

The M-26 is a new design which shares some minor similarities to some Piper productssince the two companies have a corporate information sharing agreement. The Airwolf has aLycoming AEIO-540 (aerobatic, inverted, injected opposed) which is fully capable ofsustained inverted flight. The airframe is tough. It is rated for +6/-3 Gs in theaerobatic category but is capable of more (+9/-6 should test your mettle). 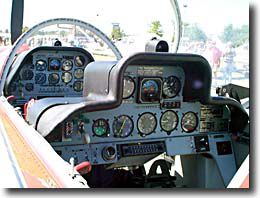 The cross country capabilities are acceptable with a cruise of 165 ktas andwith a fuel burn of 16 GPH, the 96 gallons on board will take you further than mostbladders. The 3100 gross wt. is enough to take two and light luggage.

Firing up the big Lycoming lets you know this airplane means business. The panel iswell instrumented but notably is missing a six-probe graphic engine monitor. This is asignificant short-coming in an aircraft of this quality. Taxiing is interesting in thatthe nose wheel steering is poor until some degree of speed is attained. You’ll need thebrakes for slow turns. This is not really a problem but was somewhat surprising. The runup is standard piston and the takeoff rotation occurs at 70 knots. Liftoff at 80 knotsclimb at 100 knots are all comfortable.

Now comes the fun. The control forces are excellent; light for a GA airplane (sort ofmedium for an F-15 driver) and are very well balanced. The control linkage is of push/pulltube construction and are solid. The roll rate is much quicker than the T-34 at 200degrees per second! It really goes around. All aerobatic maneuvers are accomplishedwithout unusual inputs and the hammerhead and aileron rolls seem better than mostairplanes in the category. Stalls are gentle. You get the "elephants toe dancing onthe wings" thumping but everything remained straight and it noticeably did not havethe wing drop of the T-34. Inverted flight, which is limited to 5 seconds in the T-34(except those equipped with inverted oil) can be accomplished in the M-26 for as long asyou can take it. The only question is "Just how tough are you?" 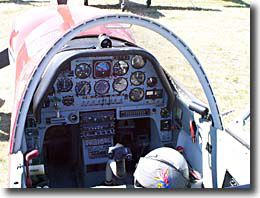 Upon returning to OSH, we set up for the approach. A 100 knot approach putsyou in great shape since the flaps can be lowered at 108 knots. The big Lycoming blocksyour vision in the nose up attitude of a no flaps landing but with 20 degrees of flaps,everything looks and feels just right. With a 54 knot stall speed, there is plenty of roomat the 70 knot landing speed which felt very comfortable.

The only complaint I had was that the air circulation in the cockpit was poor. It needsmore ventilation under the greenhouse. On the positive side, the visibility is great witha very comfortable canopy which can be opened and locked in place in any position. This isa big plus on the ground.

Special Thanks to USAF F15E driver, Major Scott "Gunny" Perdue, who arrangedfor the test flight. When you couple the skills of a good instructor like Scott with thegood manners of this new aircraft the result is ballet in the sky. The M-26 even makeslimited aerobatic skills a pleasure.