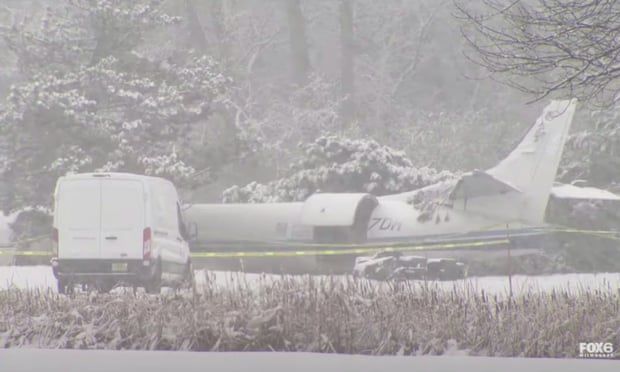 All 56 occupants of a twin-engine turboprop (possibly a Metroliner) were rescued after it crash-landed on a golf course near Milwaukee in a snowstorm. Three people and 53 dogs were on the plane. The dogs were in in danger of being euthanized and were being flown from Louisiana to Wisconsin for adoption. There were no serious injuries among them. “I think we were all unsure about what we were going to be arriving to but very grateful that everyone is safe,” Maggie Tate-Techtmann, the director of organizational development at Human Animal Welfare Society in Waukesha County, told local media.

The plane came down Tuesday morning and Western Lakes Golf Club manager Jason Hoelz described the scene with a golfer’s eye for detail. “There [were] a couple employees working on the course that heard this plane coming down and witnessed it hitting the fifth green, crashing between two trees, (going) through a marsh and another 100 feet through the second hole fairway and onto the third hole, where it uprooted another tree and came to a rest,” Hoelz told the Milwaukee Journal Sentinel. “In total, it skidded around a few hundred yards.” All the dogs are being seen by vets but there was no report on the condition of the people.