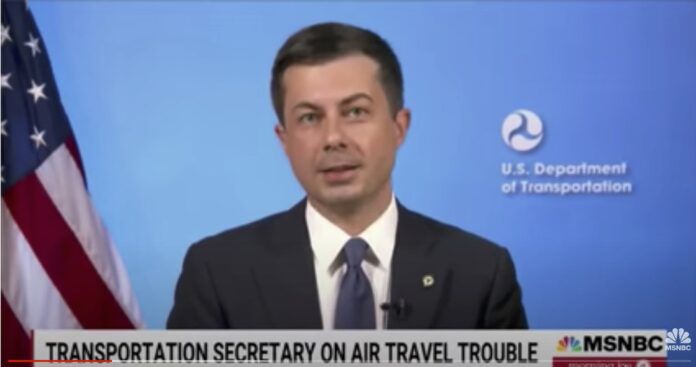 U.S. Transportation Secretary Pete Buttigieg took to the airwaves to express his concerns with trouble on the nation’s airways, specifically calling out airlines’ performance in the face of record delays. Friday (Aug. 5) saw the most canceled flights (1,613) in five weeks. Though he acknowledged that weather was a factor in the disruption, Buttigieg told CNN the situation was “an indication that we still have not seen the improvements that we need, that the system is very brittle.”

The Secretary laid much of the blame for delays and cancelations on “the human factor,” along with airlines scheduling operations beyond what they can reliably fulfill. He called out, “Not having enough crew, especially pilots, to do the job. And airlines, of course, have an obligation to service the tickets that they sell.” He told morning television host Joe Scarborough that, though there has been an improvement in so-called “blue-sky” (non-weather-related) delays, “We need to have a more fluid system,” for when bad weather causes air travel to “grind to a halt.”

Buttigieg told Scarborough that, with pent-up demand adding on to normal business airline travel, “Airlines have to be ready to meet that demand.” Referencing government bailout funds paid to the airlines, Scarborough asked if there was a deadline for reestablishing peak airline performance—and what consequences the DOT had at its disposal to enforce performance. Buttigieg explained that the measure of record is the daily cancelation rate, and the goal is to get that performance back on par with pre-pandemic levels. He also cited the turnaround time on refunding fares, saying, “If [airlines] don’t meet that, we will enforce on that.”

Buttigieg cited a new rule representing the largest expansion of passenger rights in decades, and urged passengers and other stakeholders to register comments at www.regulations.gov.