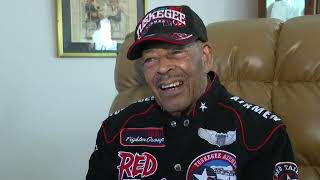 One of the last surviving members of the Tuskegee Airmen is hoping his next birthday on May 21 will be one to be remembered by thousands. Sgt. Victor Butler, who was a mechanic for the famed squadron, is asking people to send him a card. Not a Facebook post or a Twitter message or a dancing cat video, an actual card in an envelope in the mail. “Oh I’ll read every one of them,” Butler told WCVB TV. The cards can be sent to Victor Butler ℅ Gary Butler, P.O. Box 3523, Cranston, Rhode Island, 02910.

Butler wanted to fight the Nazis when war broke out in Europe and was willing to go to some lengths to make that happen, but his parents were not enthused. “At first, I was going to join the Canadian Air Force with a friend of mine, but after I had signed up my mother and father wouldn’t approve of it,” Butler said. “So I joined with the American Air Force.”