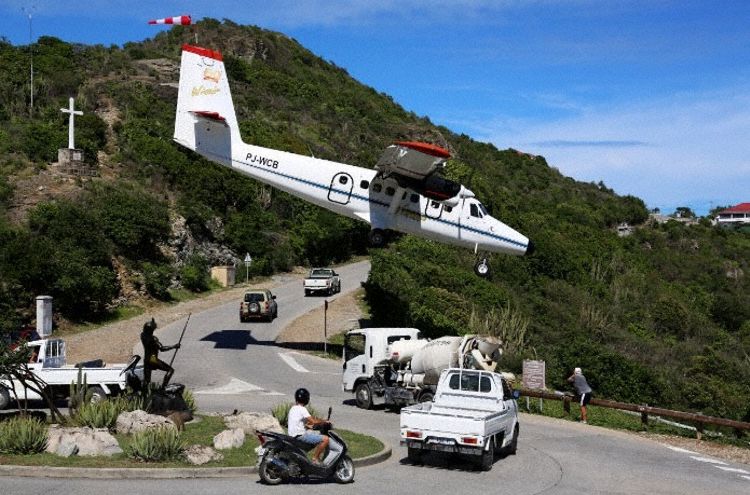 France’s civil aviation investigations organization, the BEA, issued a report (French only) last Thursday saying a Twin Otter was a little low when it knocked the camera out of the hands of a photographer while landing at the Saint Barthélemy (St. Barts) Airport in January of 2014. St. Barts is a French island in the Caribbean. The photographer was knocked off balance but not injured. The BEA didn’t explain why it took seven years to finish the report.

The aircraft was on final approach to Runway 10. The normal glide path takes aircraft over a traffic circle on a hilltop road overlooking the runway threshold. “The serious incident was the result of the low pass of the aircraft over the road as well as the presence of the pedestrian at the approach axis which is marked as an area of risk,” the Aviation Herald reported a translation of the agency’s findings to state. The crew reported feeling a “jolt” but landed safely. The aircraft had 15 passengers and two crew onboard.

The report also notes that since the mishap local officials have put up walls and barriers to block access to the most likely conflict areas of the traffic circle and to mandate special training for flight crews that regularly use the airport. Closing either the road or the runway doesn’t appear to be an option. “The risks of this specific approach must be seen in the light of the importance of the airport for the economy of the island and the connectivity to the rest of the world,” it said.