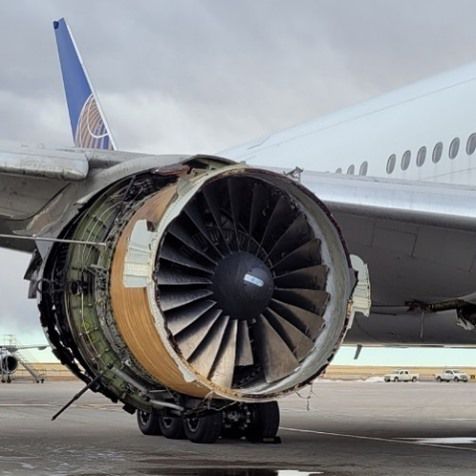 The FAA will issue an emergency AD for requiring stepped up inspections of the fan blades on Pratt & Whitney PW4000 engines following the uncontained failure of an engine on a United Airlines Boeing 777 near Denver on Saturday. FAA Administrator Steve Dickson issued a statement saying the engines have a unique hollow fan blade design and the AD is based on new information obtained by the agency. Aircraft will reportedly be grounded until inspections are done. The FAA says United is the only U.S. airline that uses the Pratts. Airlines in South Korea and Japan also have PW4000-equipped 777s.

“We reviewed all available safety data following yesterday’s incident,” Dickson said Sunday. “Based on the initial information, we concluded that the inspection interval should be stepped up for the hollow fan blades that are unique to this model of engine, used solely on Boeing 777 airplanes.” He said the AD will be published after a meeting of FAA safety officials Sunday night. Shortly after Dickson issued the statement, United announced that it was voluntarily grounding 24 777s. It’s not clear how that will affect its schedule.

The NTSB issued an investigative update late Sunday and said two fan blades on the engine were broken, one near the hub and one about half way. Part of one blade was caught by the containment ring. All the other blades had damage to the leading edges and tips. The cockpit voice and flight data recorders have been sent to Washington for analysis.

Meanwhile, Japan has ordered Japan Airlines and All Nippon Airlines to ground their fleets of Boeing 777-200 airliners equipped with PW4000 engines and is banning 777s from other countrries with those engines from landing, taking off or overflying the country. JAL has 13 affected aircraft and ANA has 19. Japan’s Ministry of Land, Infrastructure, Transport and Tourism  grounded the aircraft on Sunday and did not say how long they might be idled. The government said it was gathering information from the FAA to decide its next steps.The airlines had already voluntarily grounded the 777s before the government order.

Japan had already heightened scrutiny of the PW4000s after a JAL 777 flying from Naha to Haneda last Dec. 4 lost part of the cowl in an engine failure. The government ordered stepped up inspections of the engines following that incident. At least one flight was cancelled because of the grounding but both airlines have plenty of aircraft available to fill in for the 777s and no more disruptions are anticipated.