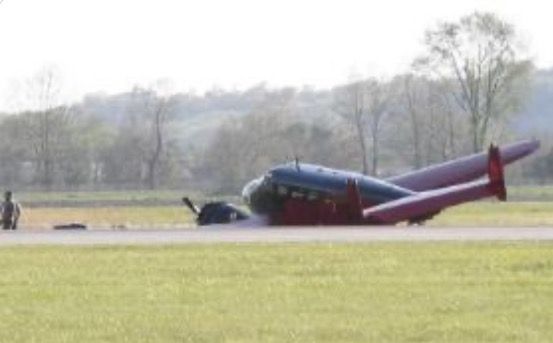 Airshow performer Matt Younkin is fine but his pristine Beech 18 is a little banged up after a partial gear-up landing in St. Joseph, Missouri, on Thursday. Younkin was headed to perform his spectacular twin aerobatics routine at the Sound of Speed Airshow. “As you may have heard, we had an interesting arrival at the Sound of Speed Airshow this evening,” Younkin said in a Facebook post late Thursday. “The good news is that we are fine and the airplane is repairable.”

Younkin said he discovered the problem with the left gear as he set up to land and no amount of fiddling would make it drop. “When all options were exhausted, we made the decision to land,” he wrote. “Crash fire rescue was launched as a precautionary measure, and all in all, it worked out as well as we could have hoped.” He didn’t say how long it might take to fix the Beech.