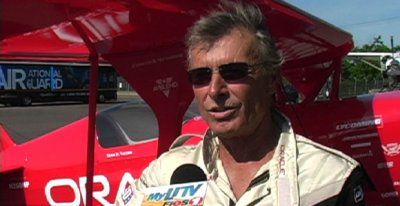 Details were still sketchy at our deadline, but yesterday morning at about 10:30 Sean D. Tucker was practicing a routine in Red River Parish, La., when the airplane had a problem, and he had to bail out. Expected to fly the Columbia 400 at the Sun ‘n Fun this weekend, at least one early report said Tucker “flew out of the Red River Parish Airport to practice his routine for a weekend air show.” The same report identified the crash aircraft as “the Challenger Aerobatic Bi-Plane.” According to early reports, Tucker experienced a loss of elevator control not long after takeoff. He was able to establish a climb with trim and troubleshoot for about 10 or 15 minutes. Once the decision was made that a safe landing wasn’t possible, he “flew until it was empty,” according to Karl Koeppen who was quoted by local news as a spokesman for Tucker. The performer abandoned the airplane at about 8,500 feet over an uninhabited area. Tucker’s exit wasn’t smooth and he momentarily got hung up on the tail of the airplane but freed himself and landed safely under canopy. The airplane was destroyed when it crashed into a cotton field but nobody on the ground was hurt. The landowner witnessed who witnessed the event said, “I just saw the dust when the plane hit … and a few miles away I saw him parachute down.” Tucker regularly flies a his Challenger biplane. He is scheduled to perform at Sun ‘n Fun Thursday through Sunday this week and also is scheduled to debut a new routine in a Columbia 400, demonstrating upset recovery techniques. At our deadline, there was not yet confirmation or cancellation regarding his plans to fly this weekend.